Peter Nordlander relocated from Sweden to the United States in 1986, first working for IBM in New York before ultimately ending up in South Texas, where he works as a physics professor at Rice University. Here, Peter purchased a ranch about 200 miles south of Houston and embraced his own version of the American Dream: becoming a rancher. Peter and his wife, along with their three dogs, have been cultivated their Texas oasis for the last twenty years, and live full time in Houston. He loves to hunt, whether it’s for big game like deer and wild pigs — which he primarily does — or occasionally for fowl such as turkeys, ducks, geese and quail. His wife manages their orchard, growing olive trees and lots of other fruit varieties, such as pomegranate, peaches, oranges, grapefruits, apricots and pecans. They’ve dabbled in growing tomatoes, but fighting off the birds and rabbits proved to be too much work.
But birds and rabbits are mild pests compared to the token 6-foot rattlesnake who lives on their property. “Always have a revolver handy,” advises Peter, in his thick Swedish accent. 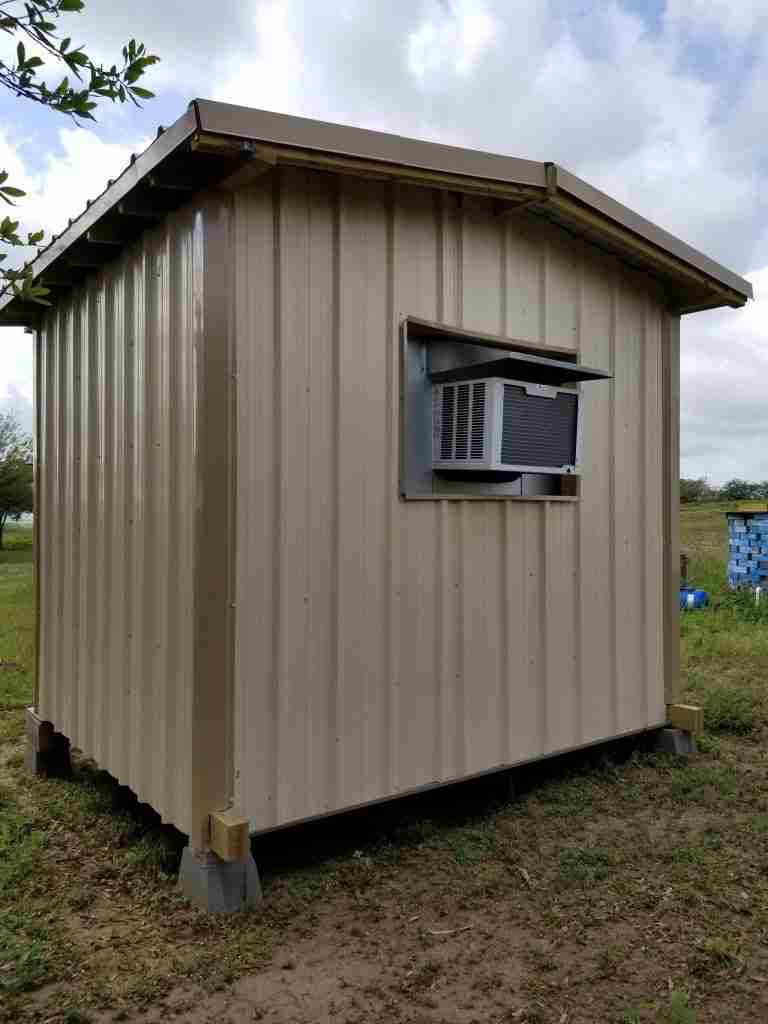 Between October and May each year, hunting season is full on in Texas. Technically, you can hunt wild pigs year-round in Texas, since their population is teeming, but Pete points out that “between May and October, it’s too hot” to do anything outside, let alone hunt. And as Peter got more into hunting, his taste for venison meat and wild pig grew. “Wild pig is just so much better than what you buy in the supermarket,” he tells us. “The pork at the store is filled with chemicals. Wild pig meat doesn’t even look the same. Store-bought pig has fat on the outside of the meat, while the fat on wild pig is marbled. When you cook it, the fat drips out and really tenderizes the meat.”

“For nineteen years, we’ve loved our venison but could never hang it (to dry). It gets warm too quickly in Texas,” Peter laments. “Proper dry aging (which takes about three weeks) with the right cold storage and the precise temperature has an enormous effect on the quality of the meat. You’ve got to let it hang in the cold for weeks to let the natural enzymes into the meat, making it tender. It’s like night and day.”

You can guess what happens next. That’s right: Peter discovered the CoolBot. He came across an ad for CoolBot in a Cabela’s catalogue while reading an article about dry-aged venison, which led him to our website. Peter ordered his CoolBot in the beginning of Texas’ long hunting season, at the end of November last year. He loved that there were options to either construct your own cooler or purchasing a premade one. Peter opted for Store It Cold’s prefab model, where you put the walls and floor together yourself — but don’t think for a second that meant less work for Peter. Because of Texas’ wild weather, from savage heat and intense sun to wild tornados and hurricanes, Peter actually built a platform with walls around it to enclose his prefab CoolBot cooler for double the protection from the elements. “It was very sturdy,” Peter assured us of his CoolBot cooler, “but we wanted to enclose it further to tornado-proof it.” The CoolBot assemblage took just a couple of hours, and the entire build of the cooler-within-the-enclosure was complete in two days. 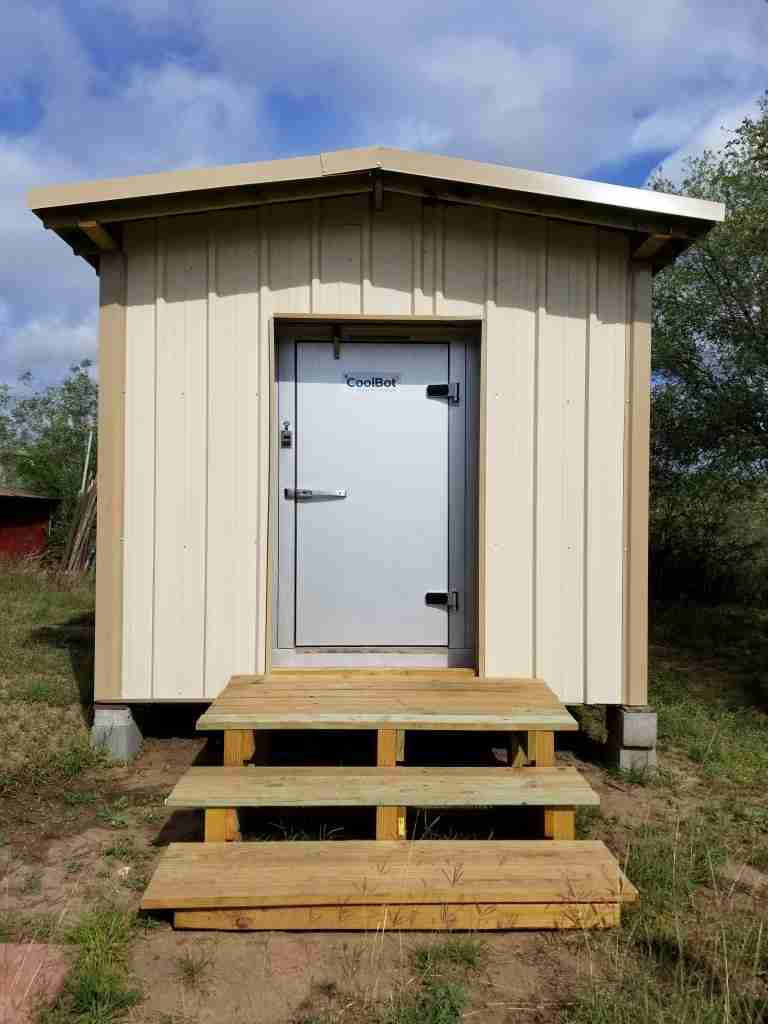 “I was a little bit nervous about the CoolBot being able to keep the temperature for the dry-aging of meat (in the Texas heat), but it’s been no problem,” Peter confides. “It’s amazing, the combination of the aluminum cooler with the A/C unit. It’s so easy to assemble and keeps temperature extremely well. We’re very impressed with the door, it’s really high quality. All of the material and components that are used are really first class. We’re extremely happy with it.”

“CoolBot is worth its weight in gold,” he tells us.

Stop, Peter, we’re blushing.
“One thing that would be nice — for other people who may not be so handy — would be the option to purchase an extra rack for hanging (meat), like the one I’ve built,” Peter suggests. He was initially hesitant to hang game from the ceiling, because it’s made of insulation material. So he designed his own rack, capable of hanging six deer, plus some smaller pieces and/or hogs, to maximize storage in his walk-in cooler. 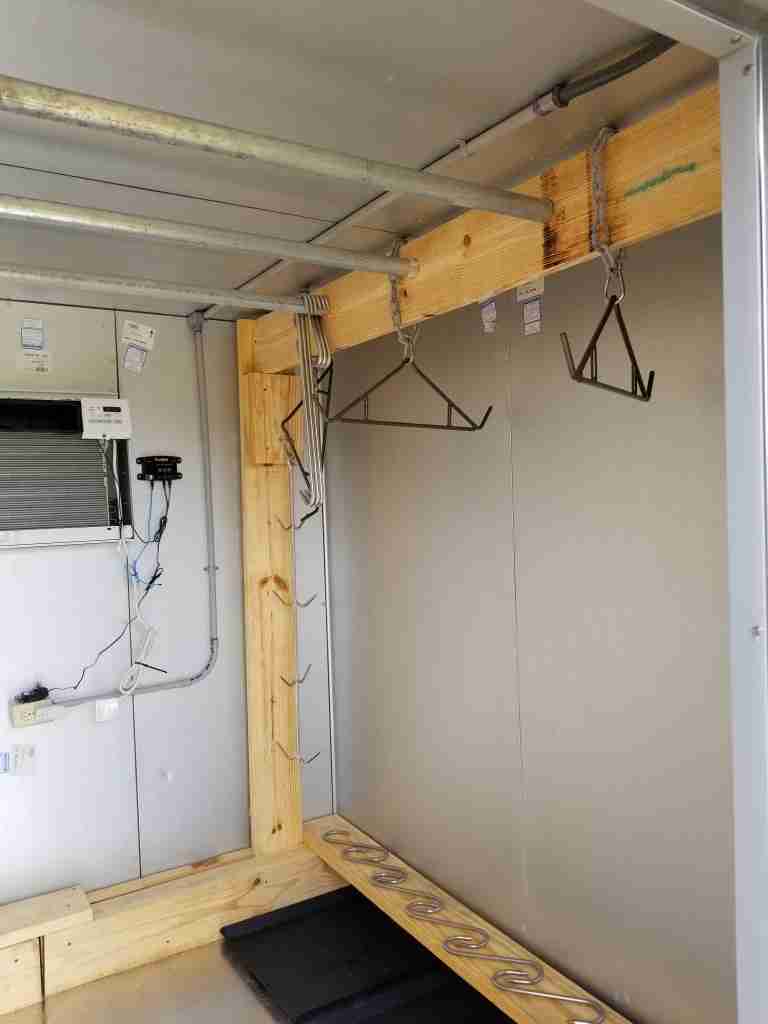 So far this year — thanks to his new CoolBot and its ability to store his game — Peter has killed four bucks, yielding 500 pounds of meat. “This makes us very popular among friends,” he laughs. As Peter described to us in great detail the Mediterranean-style Italian sausages that he and his wife made, infused with fennel and garlic, our mouths began to water. We had to cut Peter off as he went on to tell us about how you can best tell the difference in the dry-aged venison in ground meat and roasts, because he was making us so hungry.
“The quality and ease that the CoolBot has provided us, and no longer having to worry so much about the hot Texas sun, is priceless,” he concludes.