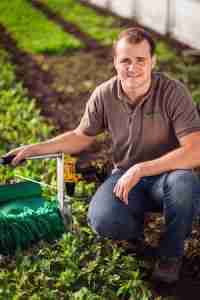 Until a few years ago, small farmers had a tough time making a profit from greens. This was, in part, because the crops were so time-consuming to harvest. It could take three or four people a couple of hours on their hands and knees to harvest greens for market.

This is an experience Jonathan Dysinger knew well. He had grown up on a farm and spent hours on his hands and knees harvesting by hand. To save himself and others from the same fate, he invented the Quick Cut Greens Harvester, which can cut over 175 lbs of greens per hour. That means one person can do the job of three or four, in significantly less time.

There’s a lot of mythology surrounding Jonathan Dysinger. He has a reputation as being something of a boy wonder in small farming circles because of his age — he was a mere 15 when he started working on the greens harvester. (I first heard of him from Curtis Stone, who named the machine as one of his three game-changing technologies for small farmers.)

Now, at the ripe old age of 23, Dysinger runs the company Farmer’s Friend. The Quick Cut Greens Harvester is their flagship product, and they also sell other tools to help small farmers save time and money.

I got the chance to talk with Dysinger about how he came up with the idea of the harvester and what other small farm technologies he’s excited about now.


“I’m all about trying to come up with faster ways to get a job done.”

Dysinger was born in Kenya, where his parents were missionaries. When he was little, the family moved back to the United States, first to Michigan and then to Tennessee.

His dad got a job teaching in a one-room schoolhouse, but then he decided to take a different path: farming. They began with strawberries, but, recognizing the value of not having all of your eggs in one basket, they branched out and started winter growing. They even launched a winter CSA, which was pretty revolutionary at the time.

Dysinger got the idea for the the greens harvester when, at age 15, he visited Eliot Coleman’s Four Season Farm for the first time. He saw the need for an efficient tool that fell somewhere between a pair of scissors and a $10K commercial unit.

“I’m all about trying to come up with faster ways to get a job done,” he said.
Bitten by the inventing bug, he made prototypes out of anything and everything he could find. Dysinger was fortunate to know a retired engineer who was willing to donate his time to help a young guy get started.

After a few years, they had a product ready to bring to market.

The Quick Cut Greens Harvester became available in fall of 2012, as part of the Johnny’s Seeds catalog. To say it took off immediately is an understatement. The initial projections were that they would sell about 150 a year. They hit that number within just a few months.

Today, Farmer’s Friend sells all of its products direct and the Quick Cut Greens Harvester is in its third model, still earning its distinction as a must-have tool for any small farmer growing mesclun and other baby greens.

Boosting Farmers’ Profits by Saving Them Time and Money

Recently, Farmer’s Friend has started expanding its product line. Dysinger is doing this very deliberately, selecting only those products that he believes will help farmers achieve greater profitability.

“My goal for Farmer’s Friend isn’t just to become another one-stop shop for farm supplies,” he says, “but to provide really important things for farms that are going to save significant time or significant money and increase productivity and profitability.”

Here are the productivity- and profit-boosting tools he’s most excited about right now:

A caterpillar tunnel is a season extension structure that can give farms a huge competitive advantage. As Dysinger says, “Your season is made if you can get your products to market before anyone else and make it last longer than anyone else.”

It’s common for farmers to construct their own caterpillar tunnels from materials found at home improvement stores, but this can be both time-consuming and costly. Farmer’s Friend’s caterpillar tunnel kits take just a few hours to set up and cost only $1250 for a 14’ x 100’ tunnel. That’s cheaper than buying the materials at Lowe’s and building one yourself.

Silage tarps are useful for clearing beds or fields of crop residues as well as killing weeds. Farmer’s Friend’s silage tarps are UV treated to ensure no sun gets through.

Farmer’s Friend has recently become a CoolBot authorized distributor, but Dysinger’s family has had a CoolBot on their farm for at least 7 or 8 years. “The CoolBot works well with where we are right now,” he says. “It fits into the category of saving people money and making them more profitable. The CoolBot provides an affordable cold storage solution that can help farmers store their crops longer. It also helps them boost profitability by freeing up their time for other things, because they no longer need to do last-day harvesting so their crops won’t wilt.”

On the whole, Dysinger’s goal is to help farmers improve productivity and profitability via technology. That’s a mission we can get behind 100%.
To stay up-to-date on the new tools and technologies Dysinger’s working on, follow Farmer’s Friend on Instagram and Facebook. 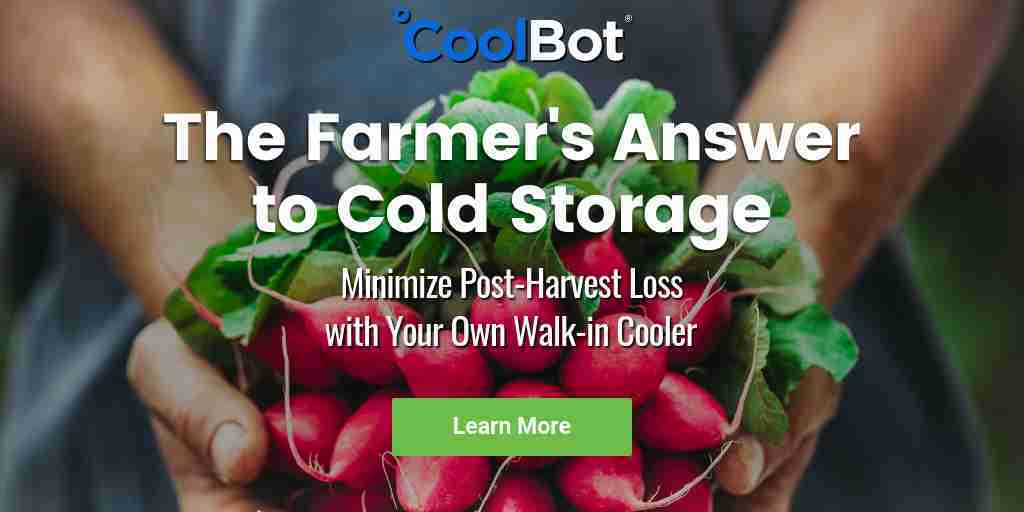