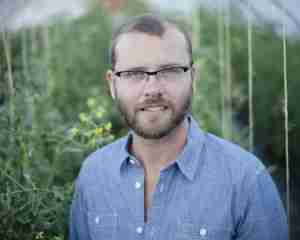 The next time you hear someone say that small farms can’t be profitable, tell them (as respectfully as possible, of course) that they have no idea what they’re talking about. Or, at least, that they need to talk with Curtis Stone, aka The Urban Farmer.

A touring-musician-turned-urban-farmer, Stone established the Green City Acres farm in Kelowna, British Columbia, in 2010. Today, Green City Acres encompasses a mere ⅓ acre, and this year they’re on track to clear $110,000 in sales (take a virtual tour of the farm here).

Those are the kind of numbers that would make anyone consider giving up the rat race for a life on the farm. And Stone helps them do just that. A prolific blogger and vlogger, published author, and online course teacher, Stone spends most of his time now educating people about exactly how to build a profitable urban farming business.

Stone first became interested in urban farming in 2008. He was living in Montreal at the time, when two events combined to create a perfect storm. First, the recession started. And second, there were a couple of freezing storms in Montreal. Stone says: “The storms were really scary to live through. The city was gridlocked, and I thought, How fragile we are! If the trucks stop coming, people could starve. That experience motivated me to get into farming.”

When Stone decided to moved out west, he rode his bike from Kelowna to Tijuana, visiting ecovillages, intentional communities, and organic farms. He saw some people doing urban farming, including one guy in Nelson, B.C., who was doing it by bike.

So Stone decided to give it a whirl. He got some books on SPIN (small plot intensive) farming, tried it, and it worked.

Farming isn’t generally considered an immediately profitable venture. But Stone made money in his first year. The business doubled and doubled, and doubled again, until they were up to 2 ½ acres and 8 staff. The farm was making $250,000 a year, but they had a lot of overhead.

So Stone decided to take an ax to the operation, double-downing on the things that worked and cutting the things that didn’t. “I followed the Pareto principle. We ‘80/20ed’ everything — cut customers and products that were dead weight and streamlined the farm down to ⅓ acre.” It paid off. In the first year, the lean new farm achieved $75,000 in sales. The second year, they grew to $85,000, and now, in the third year, they’re on track for $110,000.

Given that typical per-acre revenue numbers rarely exceed five figures, even for the most lucrative crops, the obvious question is: How?

The answer is deceptively easy.

Stone says: “We did it by focusing on what’s profitable. We use biointensive farming techniques and grow only about 15 to 20 different products, mostly cherry tomatoes, loose leaf greens, microgreens, and herbs.”

Stone’s laser focus on profitability led him to develop an approach to urban farming that he details in his new book The Urban Farmer and in the workshops he delivers around the world.

Here’s are three of Stone’s secrets to profitable urban farming:

“The smaller you go, the more profitable you are per square foot.” This is because you can micromanage the farm and pay attention to the details. For example, on a small farm, you can interplant short- and long-term crops.
Of course, on a small piece of land, you need to be highly selective about your crops. When deciding what to plant, Stone assesses five factors:

2. Focus on Tasks That Pay

Many of the tasks that we associate with farm work, like weeding, don’t pay. What does pay? Planting and pulling crops. So that’s where you should spend your time.
Stone says, “We mitigate or eliminate tasks that don’t have a net return. For example, we eliminate weeding by using stale seed beds and a flame weeder. We also use landscape fabric on all of the perimeters of the farm, so we spend very little time pushing a stirrup hoe or hand-pulling weeds.”

3. Use the Appropriate Technology

In urban farming, the tools make all of the difference. Stone recommends tools that are simple, cost-effective, modular, and mobile. Here are three technologies he calls “game changers for small farmers”:

Stone also uses a variety of specialty tools from Johnny’s, like the Jang seeder and a walk-behind tractor. “With the right tools,” he says, “you can start a farm on $5,000 that will make $50,000 its first year.”

Finally, we asked Stone where he sees urban farming 5 or 10 years from now. He identified two major trends.

First, he believes more people will get into urban farming. “Especially among young people, it’s a growing industry. In my workshops, I get former doctors, lawyers, teachers. Many people are coming to urban farming as a new career — people who want to spend more time outside and contribute to the community.”

This growth is being fueled by investment capital from companies like Biological Capital, which helps get young people into farms.

He also expects more technological innovation. “I get a lot of emails from young engineers who want to build stuff to make farmers’ lives easier.” As an example, Stone notes that robotics is making its way into farming as people develop more sophisticated machinery for a small scale.

Another area of innovation is software. Stone himself is leading the charge here, working with a software company to develop a farm management app that helps farmers organize production schedules as well as the marketing and sales aspects of their business.

Sounds like a very bright future indeed! We’re excited to be a part of it.
If you’re ready to turn your yard into a revenue-generation machine, Stone has plenty of resources to help. In addition to his book and the online resources linked above, he hosts summits and workshops across the United States and globally.

In the near future, you can catch him on December 5 at the Market Gardener Tool Summit in Memphis, where he will spend a day demonstrating his favorite tools, including those mentioned in this article. He also makes regular appearances at the Mother Earth News Fair, the next of which will be held in Texas in February.