Having grown up on a pig farm, brothers Julian and Jesse Howatt are no strangers to the demands of the farm lifestyle and the reprieve that innovation can bring.

In 2013, they started a small indoor lettuce farm in Moncton, New Brunswick. Local by Atta scaled quickly from small experiment with 21 heads of lettuce in Julian’s apartment, to a shed operation with 72 heads, to a commercial vertical farm. Within about a year, Local by Atta produce could be found at the local farmers market and even in a few restaurants. 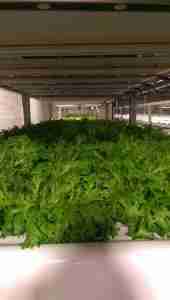 As all small farmers know, success depends largely on the ability to keep produce fresh as long as possible.

On their expanding farm, the Howatt brothers had acquired an old Coca-Cola refrigerator that they used for cold storage. But the fridge quickly ran over capacity. The farm was growing more greens than it could store before shipping them to customers.

Then tragedy struck. In January 2016, a nearby fire spread to the Howatt’s small farm, and they lost everything.

In June, after months of planning and location scouting (both Julian and Jesse have backgrounds in urban planning and urban agriculture), they began to rebuild the farm with the goal of expanding their capacity. The first problem they tackled was what to do about their cooling system.
Enter the CoolBot.

“We’ve known about CoolBots for some time and knew we wanted to make a CoolBot walk-in fridge once we expanded our farm,” Julian said. 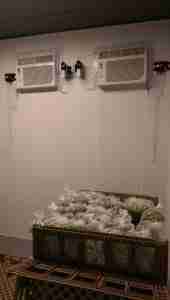 The Howatts first heard about the CoolBot from a SPIN (Small Plot Intensive) farmer in Saskatchewan. They had also spoken to other happy CoolBot customers at the farmer’s market. They realized that the CoolBot was already serving a variety of agricultural applications and could accommodate growing and diverse operations.

The brothers liked the idea of an affordable DIY cold room. “The cost savings for construction, running, and maintenance were very tempting.” So they did their research and went to work.

Julian used our air conditioner selection guide and also contacted Store It Cold’s customer service to help him during the planning phase. For the build, they used two CoolBots along with two 18,000 BTU window A/C units in a 9’x10’x8’ room with 6” of polystyrene insulation on the walls and floor and 4.5” on the ceiling. The total cost of the build was about $4,000 CDN (~$3,000 USD). 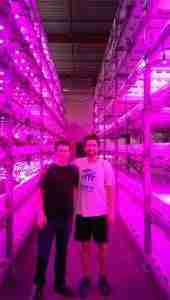 Julian found the CoolBot simple to install and tune to perfection for their lettuce, kale, herbs, and other leafy greens. “So far, so good,” he said “Our two units bring the temperature down to the low 40s very quickly, even when we open the door regularly.”

But it isn’t just greens that benefit from the CoolBot walk-in cooler. It gets hot in New Brunswick in the summer. Julian told us that while they were building the farm — and didn’t yet have air conditioning in the warehouse — they would step into the cooler from time to time to cool down!

Today, Local by Atta has the capacity to produce about 1,300 units/per week, whether that’s a head of lettuce; a bunch of basil, kale, Swiss chard, or other green; or a container of micro greens or other small speciality greens. Their current space can accommodate 5,000 units/week, a goal that they will be working toward over the next couple of years.

And there it is. From tragedy to prosperity, Local by Atta is growing crops and profits with CoolBot-driven cold storage!