Eddy Gilmore has led a fairly interesting life. In fact, you can read about it in his book The Emancipation of a Buried Man, in which he vividly describes growing up as a child of an extreme hoarder.

In a nutshell, Eddy can be described as a part-time writer, a part-time farmer and a full-time father of twins living in Duluth, MN. His wife is a skilled artist, specializing in colorful and surreal paintings. “Our family, we’re on a 3-legged stool as far as income goes,” Eddy says. “The farm, my wife’s paintings and a little bit of writing work. It’s great to have that diversity of income. We’ve got kind of a synergy together: the farm promotes her art and visa versa.”

But Eddy wasn’t always a farmer. He hardly considers himself one, insisting he really has no idea what he’s doing. He is consistently surprised by his own success in the field microgreens, including peas, radishes and sunflower shoots. These niche crops have become his “bread and butter,” in addition to the baby greens, root veggies and pastured chickens that also make up his tiny farm.

Eddy kickstarted his Tiny Farm Duluth, comprised of just 6,000 square feet (yes, you read that right: feet!!) at the age of forty, after a self-proclaimed midlife crisis. He currently sells his produce at grocery stores throughout Duluth, from Lake Avenue Cafe and Mount Royal Fine Foods to both Whole Foods Co-ops — plus at his booth at the Duluth Farmer’s Market from May through October. Additionally, Eddy has been known to deliver crops to his neighbors and to local restaurants by bicycle. 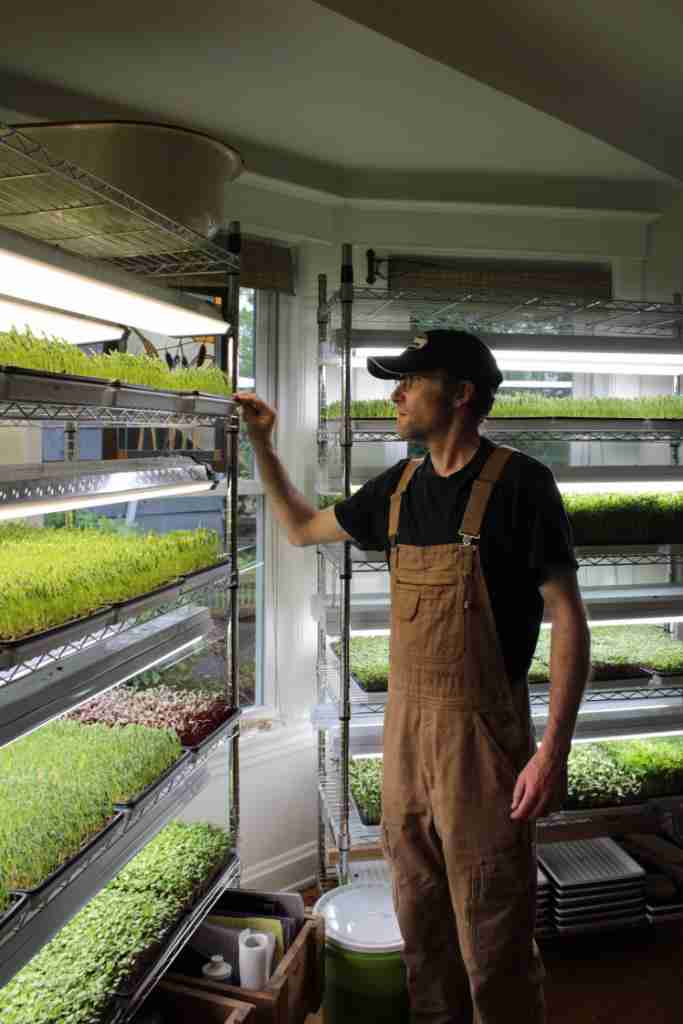 Once upon a time, Eddy was a “polyp in the bowels of corporate America.” He described his work as “moving emails around,” insisting his job was “so boring, you really don’t want to know about it.” After a while, Eddy came to the realization that he would never move up the corporate ladder. “It was soul sucking work,” he lamented.

He was worn out both physically and mentally, although he did enjoy the fact that his position allowed him to telecommute. But when he was unexpectedly laid off, after “somebody in the mothership who had no idea what (he) did fired him for filling out a spreadsheet wrong,” it was a “total punch in the gut.”

“It was one of the best things that ever happened to me, but it sucked really bad too,” he laughed. No matter how dull the job was, the fact was that it paid the mortgage. Eddy’s twins were nine years old the year that he lost his job.

Eddy was at a total loss. “I had no prospects. I’m a smart guy, but I don’t translate it well,” he tells us. “I sat down to do my resume and looked at the part where you’re supposed to brag about yourself and just wrote “accomplished bedwetter.” The only thing I had to offer the world was my book, my story. It was easy to write. It was good for my sanity, but you make, like, twenty cents an hour being an author.” 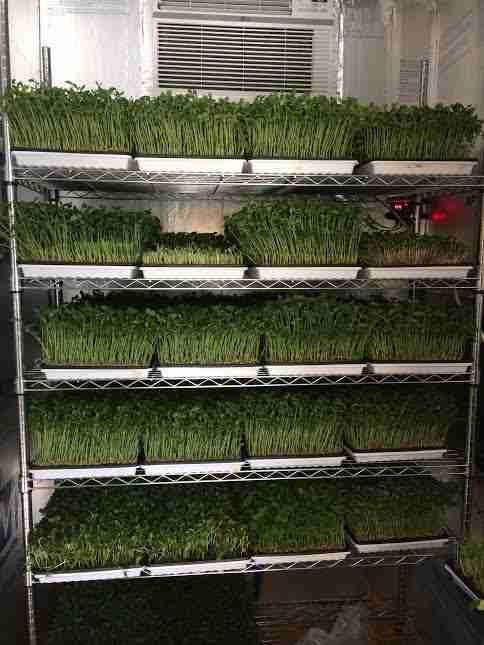 As it turns out, twenty cents an hour is not enough to raise a family. Eddy was faced with the grim reality that if he didn’t get it together, they’d be in big trouble.

Around this time, he started listening to Permaculture Voices podcast. This was the first he’d heard anything about how one could make a genuine living farming. “The constant hustling got old,” Eddy admits. “I heard this life changing podcast with Curtis Stone, The Urban Farmer. He’s sort of the man in this urban farming space.” Eddy began to entertain the idea that he, too, could be an urban farmer. In order to get the ball rolling on this new endeavor, Eddy would need to learn a lot. Plus, he would need some land and proper cold storage. He impulsively pulled the trigger on this major paradigm shift in 2016, and thus, Tiny Farm Duluth was born.

When Eddy heard Curtis Stone mention the CoolBot on his podcast, it sent off a spark. “I’d been briefly looking at walk-in coolers and they were astronomically expensive. A walk-in cooler also would’ve required a flatbed trailer to transport, which was ridiculous. At this point, who knows if my business enterprise was even going to work?” tells Eddy.

Then Eddy received a USDA loan, which helped him to afford a significant upgrade and overhaul of his existing infrastructure and equipment — including better irrigation, packing equipment, deer fencing and a CoolBot. “It was super satisfying to just go into our local store, get some 2x4s and insulation and build the box in my garage. Then we ordered an A/C unit. It was just so easy.”

2018 marks Eddy’s second full year of farming. He’s really only been doing it for about fourteen months. And, so far, the CoolBot has been an essential tool to his success.

Eddy got his CoolBot in June 2017 and built it with help from his father-in-law. “I don’t even know what I was doing before then,” he tells us. “It came pretty close to the beginning, just as I was getting my feet wet. There are so many huge decisions that are constantly having to be made in this business, it’s hard enough. Do I really want to be stressing out about how to keep my product cold in regular coolers? If the ice touches the lettuce, it burns it and turns to black mush. I just don’t have the bandwidth.”

“For as long as I can remember, I’ve wanted to be a writer and farmer. Until recently, however, I thought this was akin to being an astronaut or rockstar, nearly impossible. Coolbot is one of a precious few tools that are indispensable to the success of my farm business, and therefore to my future as a writer as well. I think I’d get bored with just being a farmer or a writer, so doing both is key. Also, I wouldn’t have the freedom to write what I want, in the style of my choosing, if it weren’t for the success of my business. I’m super grateful to Coolbot for helping to make all this possible.” 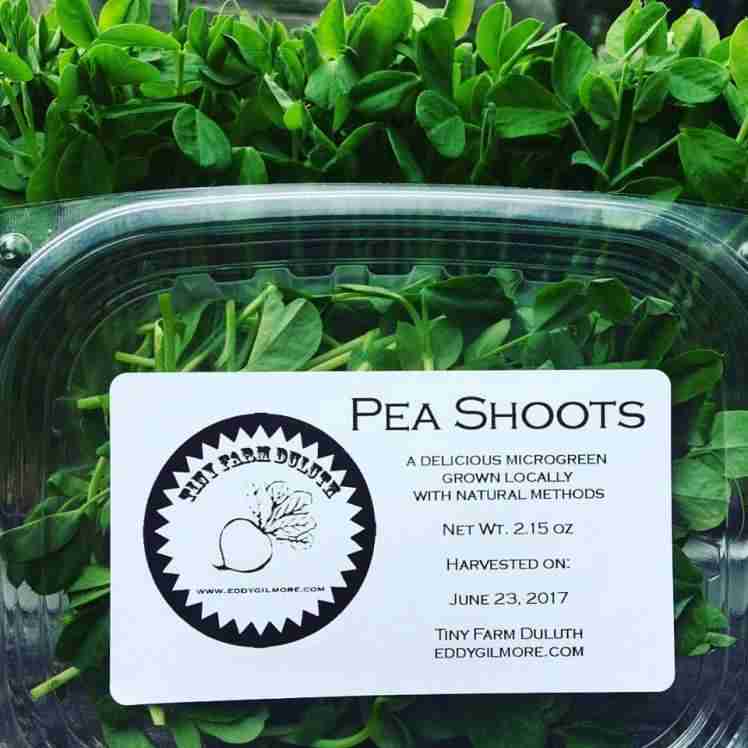 With CoolBot, Eddy is able to simply drop his finished product in his cooler and get back to work. “Farming is all about being really smart and efficient,” says Eddy. “And I’m neither.”

Thanks to CoolBot, Eddy doesn’t have to meticulously time everything to be exactly ready for his farmers market days. He can get “ahead of the game,” prepping his crops on Thursday night and harvesting on Friday morning. “Having the peas in the cooler overnight makes them sweeter. It’s great, it stops the growth.”

“Having that dang cooler is a total game changer. The restaurants are always telling me my stuff (microgreens) lasts longer than the other guy’s. It’s not rocket science. I have better quality storage. They probably think I’ve got a magic wand or something, but it’s just the cooler.”

Eddy built his CoolBot cooler for roughly $1K in his existing garage (about 5×6 feet). He’s built shelves that hold up to 20 trays, with plenty of room to stack totes of salad mix and radishes. This allows him to store extra product prior to selling it at the market, in addition to storing leftover product that doesn’t sell. “It’s probably costing me about $12/month to run the CoolBot, because it’s fairly small. I dig that.”

What does one do with microgreens, you may be wondering? “Throw them on salads and sandwiches,” Eddy explains. He sells them in big enough packets to “use liberally.” Tiny Farm Duluth’s microgreens are substantial enough that they can “even be the salad, not just a dainty restaurant garnish.”

Additionally, Eddy loves how microgreens are “crazy nutritious,” and even somehow appeal to little kids who don’t like vegetables. “Pea shoots are super sweet, tender and crunchy. They’re the gateway into the microgreen world,” proclaims Eddy.

Since he doesn’t always have time for a perfectly balanced meal, what with all his new farming responsibilities, Eddy will pile a handful of microgreens on his plate and “transform it into a gourmet experience.” He says that microgreens provide “damn good nutrition, and take just minutes to throw it together.”

Thinking of starting a farm like Eddy’s? You’ll need a few basic supplies to get started, in addition to seeds and soil. We recommend checking out these gardening tools, work gloves, and food-grade buckets. And if you want to grow goods like microgreens that can be stacked on shelves, consider picking up some wire shelving and a misting system.

Good luck on your future harvest!