We’re always excited to talk to our super creative CoolBot customers, and Scott Brooks is a stellar example of a multi talented entrepreneur.

After years of processing game for himself and his friends, he’s leveled up to establish his own mobile game processing business that will literally come to you and provide full service meat processing while you wait — or continue on your hunt! Plus, Scott has found a way to utilize his trailer year round, even once hunting season has come to a close.

Read on to hear Scott’s story of how the CoolBot has given him the freedom to take his skills on the road less traveled… and off into the woods.

Scott was working for a local grocery store in Mesa, AZ, when word got out that he was a pro at processing game in his garage. His friends began to bring him deer and elk, then friends of friends would inquire and through word of mouth, Scott’s services became quite popular among local hunters. He admits that having multiple animals in his garage was not always the best situation.

Scott wanted to build a shed or trailer that abided by local and state laws where he could cleanly and efficiently process game. A shed would have been hard to build, what with permitting and requirements. But if he built a trailer, he could utilize food truck regulations and permitting instead.

“I based the trailer off of what we used in the meat department: the hanging hooks, work table, power and cooling requirements,” Scott explains. While determining how much space he would need for his trailer’s cooler, Scott stumbled upon the CoolBot online. “I knew I wanted to somehow trick the A/C unit, and when I searched YouTube, the CoolBot came right up. I did some research and quickly decided on CoolBot.”

So Scott purchased a CoolBot and outfitted his trailer — which measures 6’ x 8 ‘x 7’ — with six inches of insulation on each wall, four inches on the door and four more inches on the floor of the trailer. And just like that, Scott had a clean and safe space to hang and cool the animals prior to processing — plus additional space for curing meats, too.

According to Scott, his trailer is “one hundred percent mobile.” In addition to his cooler, Scott installed a water tank, water heater and natural gas generator. “The trailer can go out to the middle of the woods,” says Scott.

“If you’ve got a large hunting group, I can go out to your campsite and do it (process game) right there in camp. Sometimes I’ll meet people halfway, pick up their elk and process it on the spot. Or I go to people’s homes and do it right in their driveway.” 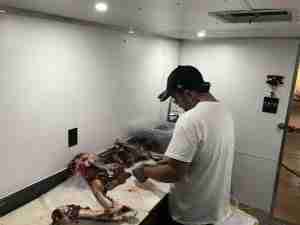 The service Scott offers to his clients is special because of his flexibility and the convenience and ease that he offers to people. “People don’t offer what I offer,” he tells us. “Summer sausage, jerky, etc. Lots of game processors where you drop off your animal then pick it up take such a huge volume of animals, so you might not see yours back for weeks or months. My system, I’m right there doing it and you can freeze it that same afternoon.”

A day in the life of Scott Brooks and his Country Boys Mobile Game Processing Trailer looks like this:

First, he’ll pick up the animal. Then he’ll break it down into quarters and place it in his cooling room to chill. Scott hangs it, lets it cool and washes the meat.

Once cooled, Scott will debone and process to order then vacuum pack the meat. Smaller animals, for example hogs, are usually a flat rate while, with bigger animals (deer, elk, pronghorn, bear, etc.), the cost is determined by the hanging pound.

There’s a clean up fee and a packaging fee, plus additional costs for custom sausage and jerky.

From start to finish, hanging to processing, it takes Scott about “four to five hours of good, solid work.” (Plus 2-3 days for curing!)

Customers are invited to stay and watch Scott process their meat or are free to do whatever they’d like, whether it’s continuing their hunt or simply relaxing on their living room couch.

As it’s only Scott’s first year with his CoolBot — his trailer has been operational for just one season — he’s still working on dialing in his system. He bought his CoolBot in August and hunting season in Arizona runs from early September through February. “It works great,” he says. “It’s exactly as advertised. It took a bit of time to get used to it, figuring out what temperatures we needed.” 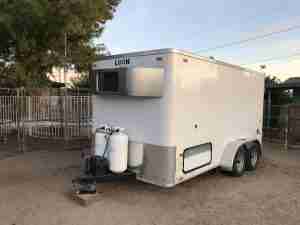 In order to maximize on his newly founded “food truck” slash mobile game processing business, Scott is looking to get into campsite catering for the summer months. During their large group hunting trips, Scott and his dad typically do all the cooking for everyone and enjoy it a lot. “There are lots of major campsites throughout Arizona, from hikers to the boy scouts and girl scouts, so I will be able to take the trailer out and cook and store food for them during their outings,” says Scott.

Since Scott is a hunter and hunting season is his busy time, he doesn’t get to go out as often anymore. He will typically do one major hunt each year, for either elk or deer.

When we inquired about where the best hunting in Arizona was, Scott — who’s born and raised in the Grand Canyon State — disclosed, “Anywhere outside of Phoenix. There are really good units up north by the Grand Canyon, where you can hunt almost anytime a year. Since the deer population isn’t as dense it is as out East, hunting in Arizona involves lots of sitting and scoping with binoculars. It’s lots of fun, but a bit more challenging.”