Nick Hegge has been homebrewing his own beer for about a decade. At first, he would work out of his kitchen with a bucket, but his hobby quickly expanded to take over his whole garage. Now brewing encompasses a “good portion of his life,” according to Nick, who’s a video producer by day and homebrewer/super dad by night. (His two and a half year old daughter loves to help out by bringing Nick buckets when it’s time to clean up.) Nick recently submitted the official paperwork to license his little 230 square foot garage with the federal government, which will permit him to share his homebrews to people other than his good friends and immediately family. While Nick won’t be able to host individuals throwing back pints at Lost Bear Brews, his new production license will allow him to sell kegs, growlers and limited release cans out of his garage — plus he will be able to sell kegs to nearby restaurants and taprooms, as well.

Nick’s home isn’t exactly on anybody’s way to or from anywhere, nestled deep in the woods of Woodinville, Washington. But his signature focus on unique beer characteristics — from fruity saisons and salty gose to IPLs (hybrids of lager and IPA) to acidic sours and other strange flavors that aren’t readily available in the marketplace — has made his beer celebrated amongst locals who’ve had the pleasure of tasting it. The region of Washington where Nick resides is already popular amongst wine enthusiasts. As more tourists flow through, the demand for craft beer has become apparent, with local breweries popping up in between existing wineries to accommodate. 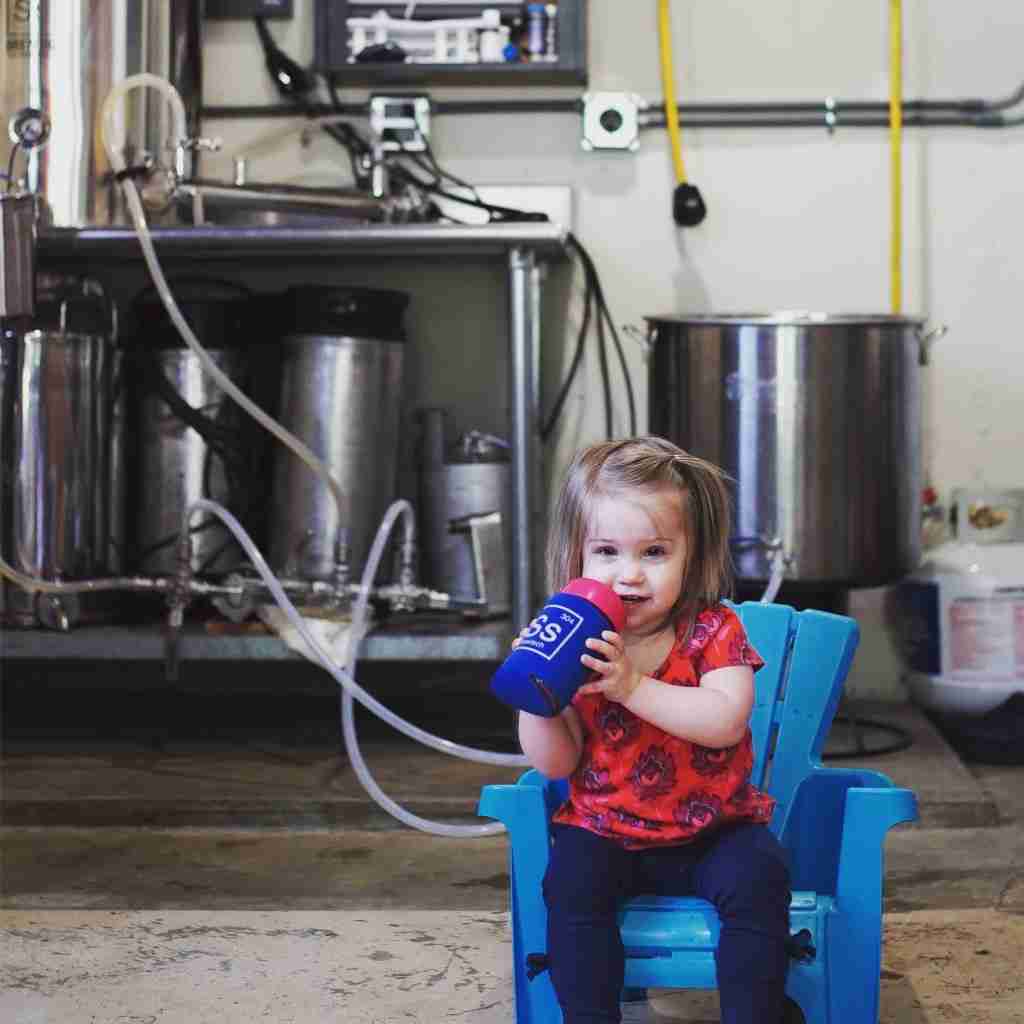 As Nick’s brewing began to gain momentum, his need for more cold storage became obvious. Specifically, the moment he switched to a one-barrel system, which translates to about 30 gallons of beer. Between his chest freezer and kegerator, one batch would dominate his entire existing cold storage set up. He began to peruse Craigslist, as one does, looking for used walk-in coolers. Everything was so expensive, or the size wasn’t right for his garage space. He even talked to a few restaurants and considered buying their used coolers, but his dilemma remained: How to best utilize the space in his garage so that there was still plenty of room to work? Plus, he will eventually need a designated point-of-sale area. 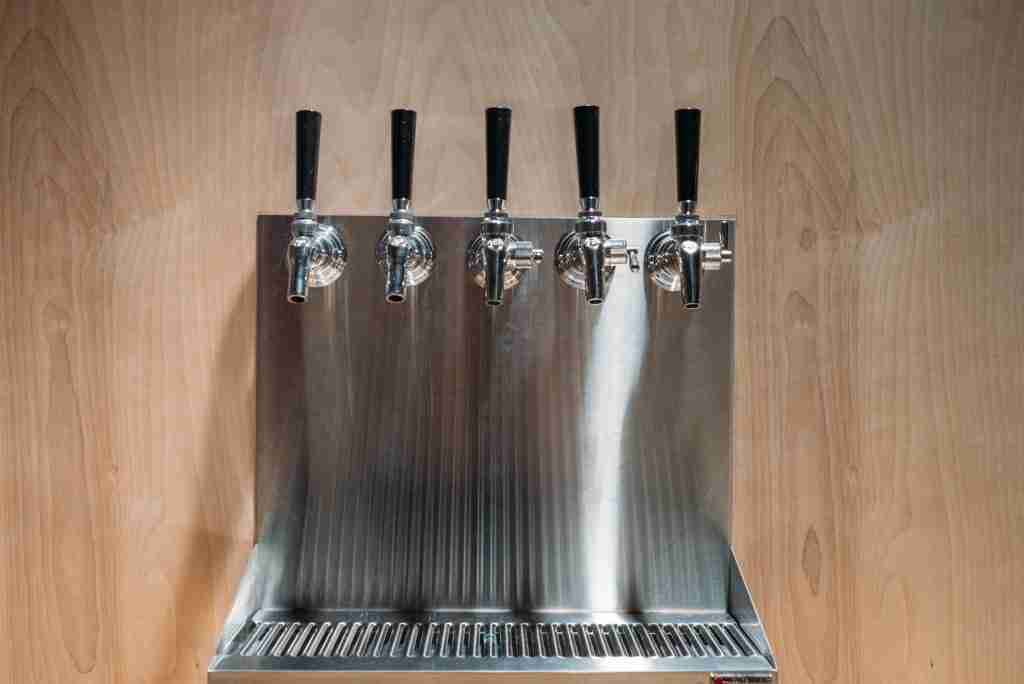 When Nick stumbled across CoolBot, it seemed “right up his alley.” His entire brewery was DIY, so it only made sense that he would build his own cooler, too. “It seemed like a natural progression for me,” Nick explained to us. “It was definitely something I was capable of building, so I felt pretty confident about it. When I pulled the trigger and ordered the CoolBot, I’d started building (the framework for it) before it even showed up. The whole thing took about two hours, plus a couple of runs to work out the installation. I was able to get any additional hardware that I needed at Home Depot, which was super convenient. I was happy to not have to professionally order anything.”
“The whole brewery was something I’ve always created myself and built myself (and funded myself). I built my own raspberry pi controller to work the brewing mechanisms and put in temperature controllers for the glycol, heaters and fermentors,” Nick explained. He found a 10,000BTU LG A/C unit on Craigslist for just $50, making his cooler build even more economical. As a bonus, Nick installed a Google voice-commanded fan to reduce humidity and a bunch of color-changing LED lights to personalize his cooler, plus he finished its exterior with birch plywood on the outside and plans to add five tap handles. 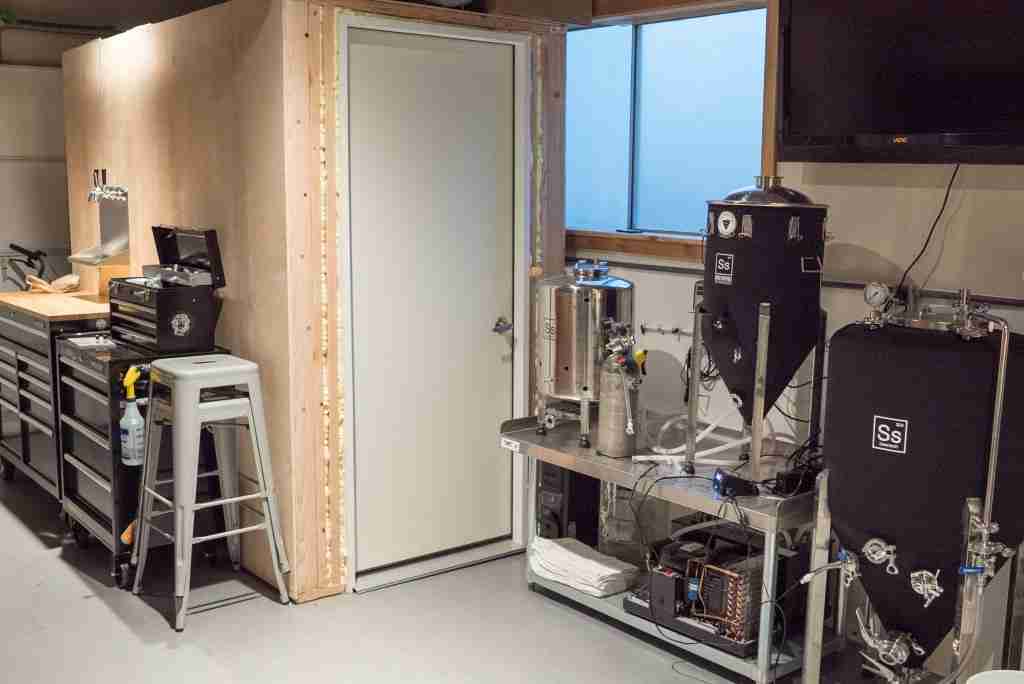 All of Nick’s beer ingredients are sourced locally throughout the Pacific Northwest. Skagit Valley Malting in Mt. Vernon, WA “makes a great malt with good flavor characteristics,” while his hops (Cashmere, Cascade and Citron varieties) come from Yakima Valley in Central Washington and yeast hails from Portland, OR.
Nick’s current small-scale business plan entails selling kegs to restaurants, while also selling kegs, growlers and cans out of the garage to individuals who are willing to “come out to the middle of nowhere to get cans you can’t get anywhere else.” He plans to keep Lost Bear Brews operating out of the garage as long as he can, scaling up as he needs to. He hopes to be (fingers crossed!) fully open by mid-summer 2018.
What’s Nick’s poison? He digs his homebrewed Red Rye IPA (6.5%). How do you taste it? You’ll just have to trek out to Woodinville, Washington, find the little house in the woods and buy a growler out of the garage.