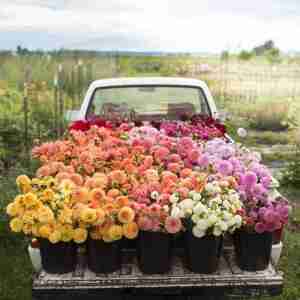 Erin Benzakein might not be a household name (yet!), but you’ve probably seen this incredible photo of a truck bed filled with dahlias. The image went viral last year, getting almost 32,000 likes on Instagram. It was picked up by Buzzfeed and Hello Giggles. Even Britney Spears reposted it!

Though the rest of us would be lucky to see a sight like that once in our lives, it’s pretty much par for the course at Floret Flower Farm, a two-acre farm in Skagit Valley, WA, which Benzakein runs with her family and a small crew.

Floret Flower Farm is approaching their 10th year of existence. In that time, the farm has become one of the country’s top flower-florist businesses. In 2014, Floret was named an American Made Honoree by Martha Stewart Living. And earlier this month, Benzakein released her second book, Cut Flower Garden: Grow, Harvest & Arrange Stunning Seasonal Blooms, which earned a 5-star rating on Amazon with over 50 customer reviews — in fewer than 10 days!

And to think…it all happened kind of by accident.

Twelve years ago, Benzakein and her family moved from Seattle to the Skagit Valley to pursue a quieter, more meaningful life. She wasn’t planning to be a farmer or a florist. In fact, she wasn’t entirely sure what she wanted to do.

“I had two small children,” says Benzakein. “I knew I loved nature and gardening, but I couldn’t figure out how to turn that into something. A lot of experimenting later, I stumbled into flowers.” (Quite the stumble!)

The Benzakeins started growing veggies and flowers in their garden. The flowers flourished, so they shared their bounty with friends, family, and neighbors. Soon enough, people were asking if they could buy the flowers.
And thus Floret Flower Farm was born. 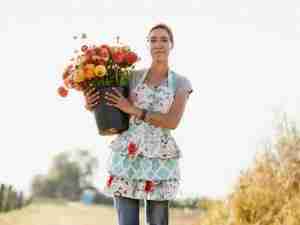 It’s all natural and highly efficient, using a combination of organic soil, succession planting, and lots of love to grow more flowers on their two acres than more traditional farms do on plots many times that size. “We grow everything organically,” Benzakein explains. “We focus on building great soil and utilizing close plant spacing. In a bed where most people would plant a row or two, we plant 5. We have a plant spacing system that allows us to get 450 plants out of a bed where others get only 60 or 70.”

The farm grows flowers for an impressive 22 Whole Foods stores across the Pacific Northwest, as well as supplying local CSAs, florists, and designers. Benzakein also hosts wildly successful hands-on workshops at the farm. “We have people fly in from all over the world to attend our workshops — they sell out in minutes,” she says.

Protip: If you want to increase your chances of getting into one of these workshops, sign up for the Floret Farms newsletter so you hear about them first.

The book, which was just published on March 7, teaches readers how to grow the flower garden of their dreams, including how to prep your garden and space your plants. It covers 175 flower varieties. If you have an eye for design and want your thumb to be greener, you’ll definitely want to pick up a copy.

Naturally, as the farm grew, they needed more equipment, like the truck in the famous photo and a walk-in cooler to keep the flowers fresh — especially during the heat of the summer.

Many florists use traditional walk-in coolers. But Benzakein had heard too many stories about poorly timed failures and expensive repair bills. “I heard so many nightmare stories about all the stuff dying in the cooler — and we also didn’t have the money to get a big, brand new fancy unit.”

Instead, Benzakein went the DIY route. She found a cheap used box on Craigslist and invested in a CoolBot and an air conditioner. Since then, the A/C’s only gone out twice, which can be expected with heavy use. (The CoolBot hasn’t gone out at all.)

Fortunately, unlike for a traditional cooler, the repairs are easy. Rather than calling a repair technician and waiting days for maintenance, Benzakein’s husband, Chris, just runs to the store and buys a new A/C unit. They can have the cooler back up and running in about an hour. It also saves a lot of money — an A/C unit is still less expensive than a service call to a repair technician. And now they have a brand new system.

If this is your year to finally plant that garden you’ve been thinking about, here’s what we recommend: Pick up a copy of Cut Flower Garden and some starter seeds and supplies, and get to it! For inspiration, follow Floret on Facebook, Twitter, Instagram, and Pinterest.

And, as your garden thrives, be sure share your blooms with friends, family, and neighbors in true Floret Flower Farm fashion.

> Learn more about cold storage for flowers with CoolBot