David Edmondson arrived at a point in his life where it was time to make some personal dietary changes. In doing so, he taught himself a lot about nutrition and the benefits of probiotics. “Turns out we all need that stuff,” he laughed.

David loves to experiment in the kitchen, so he got himself some books on fermentation and got to work. What began as a hobby for David has evolved into a successful small business — Salt and Savour will be celebrating its fifth anniversary this year!

“Despite having German grandparents, we only bought canned kraut when I was a kid. It was never on my radar as something to make from scratch, but once I tried homemade sauerkraut, I was hooked. It’s totally different!” David explained.

David’s sauerkraut pastime started to get “a little out of control,” so he was giving away lots of it to his friends and family in order to make room for more (and to share the love, of course). People were offering to pay him for it, but he didn’t really want to take their money.

Finally, in 2013, he figured he’d bring his product to his local farmers market in Dunsmuir, CA. He only had one flavor of sauerkraut. He’d set his goal at selling ten jars and sold twenty three. The following week, he sold the rest of that batch. He was producing about forty jars per month, at the time.

These days, David produces thousands of pounds of kraut at a time (he’s presently got about 3,000 pounds fermenting). And Salt and Savour’s sauerkraut flavors are much more exotic than they used to be: caroway, horseradish & mustard seed, ginger with red cabbage, garlic and dill, apple and ginger. David has transitioned from working as a sales rep to a real estate appraiser to a full-time sauerkraut slinger.

“I’ve been in a lot of different fields, and nothing has felt rewarding like this has,” he tells us. “This has been one of the most satisfying things I’ve ever done in my life.”

David’s favorite kraut flavor is the horseradish and mustard seed, which he describes as “actually pretty mild, but the horseradish changes the whole composition.” His favorite food to add kraut to? “Eggs at breakfast.” He didn’t hesitate for a second with that answer, but then thoughtfully adds, “Or tossed in a salad, or on a baked potato… pretty much on everything except ice cream.” (This spawned a mouth-watering tangent about how he needs to team up with a local creamery to get some artisanal garlic flavored ice cream made to enjoy with the kraut. Pairs well with a gose or lambic. Mmm.)

While David is obviously stoked on the success of his business, he remains modest, reminding us that “profiting and sustaining are way different.” Salt and Savour started turning a profit after its second year, but David is “just now getting to the point where he can afford to eat (food other than sauerkraut) every day.” 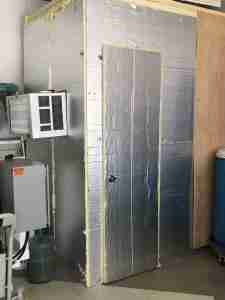 David sources all of his cabbage from wholesalers throughout California. Because he buys product year round, it comes from all different parts of the state depending on the time of year. He spends his weekends traveling to farmer’s markets throughout Northern California, from Sacramento and Redding to his hometown markets in Dunsmuir and Mt. Shasta, selling kraut at markets. Because Dunsmuir is such a small town, there’s only so much business he can do there. But he’s grateful for the “tremendous amount of local support” he’s received from his local community.

David’s big bottle neck over the last couple of years was his cold storage — or lack thereof. “I had time to bottle one flavor, but not enough room in the fridge for it all,” he told us. He was in “desperate need of a walk-in refrigerator.” His retired HVAC buddy had recommended the CoolBot as a solution.

“In a small business, you always need to watch your revenue and expenses, and when he told me about how I could save literally thousands of dollars with the CoolBot, it seemed like the way to go.” Then David ran into another friend around town who had built his own CoolBot the previous year and claimed his was “performing flawlessly.”

David has had his CoolBot up and running for just about two weeks now, but it’s already made a huge difference on his business and production levels. “For the first time ever, I’ve got plenty of product to sell at the farmer’s markets and independent grocery stores from Southern Oregon to Sacramento. Refrigeration has been a blessing for me, as far as being able to meet my demand.”

David’s DIY walk-in cooler design is very simple, since it’s only temporary. It’s made of rigid foam insulation, up to R25. Ultimately, David will be moving his fermenting station into a larger kitchen, so he saw no reason to build a premanent structure. He based his cooler design on his friend’s unit that was built for him by his brother — who also happens to be a contractor. “I obviously used YouTube for examples, too,” David admits.

Fermentation existed even before canning did. People were fermenting foods with salts back before refrigeration was even a thing, storing the jars in their cellars. But David utilizes his refrigerator to further perfect a product that was already pretty flawless to begin with.

“I use the cooler to store all of my finished product. It’s kind of an odd product because it ferments at room temperature for anywhere between three weeks and two months, then I’ll throw it in the fridge which keeps it fresh, tasty and crisp. I ferment my product to the point of optimal taste levels, then use the cold storage to preserve that flavor for as long as I can.”

David’s secret to a successful product is this: “Nothing doesn’t turn out well because I just make what I like, to begin with.”