Corey Bellarosa began making pickles as a kiddo with his dad. Making pickles wasn’t a “huge family thing,” according to Corey. It wasn’t like his family had been making pickles for generations. However, all of his family members were huge pickle “fanatics” and they were sick of “buying crap in the store,” tells Corey, spoken like a true New Yorker. So Corey and his father would go outside to their garden, harvest their Kirby cucumbers and start experimenting with ingredients and flavors. When Corey was just eleven years old, he proposed they start selling their products at local flea markets. To their surprise, the pickles would sell out in mere hours. Potential customers couldn’t resist 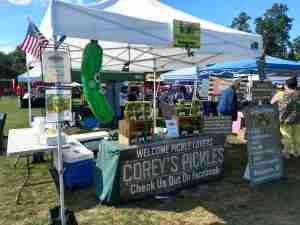 their pickles after sampling them. “You can’t get fresh pickles like that in the store,” Corey explains. “People appreciated that. They could see the passion.”   As Corey got older, he was distracted by high school and then college and stopped making pickles. When he graduated from college, he began working a full time sales job in the corporate world. After about eight years of this routine, Corey started casually pickling again on the weekends. He and his fiance were preparing to get married and buy a house and his full time job just wasn’t cutting it, “especially in New York.” So he got back into making pickles as a side hustle. 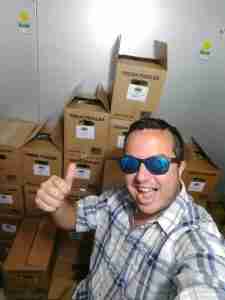 One day in the spring of 2016, a buddy of Corey’s called him up to go for a ride with him to a local flea market. It was there that Corey saw a pickle vendor from his childhood and, feeling nostalgic, Corey rushed over to buy a pickle from them. “I bit into a full sour pickle and it was hot and mushy,” Corey tells us, with crushing disappointment. “The pickle I grew up eating ⁠— I had a passion for it! ⁠⁠— it was not good.” And Corey knew at that point that it was time to go into business. “That was my turning point. The lightbulb went on,” Corey says. There was a need for good pickles in the Hudson Valley area. It turned out, the demand was “unbelievable,” and there was no way Corey would be able to keep up without hooking up with a producer. So he did just that and began to experiment. He started doing farmers markets, then began knocking on doors at local stores and presenting his product directly to buyers. Because refrigerated, cold, crisp and delicious pickles were so scarce in the area, people were eager to consume his product ⁠⁠— and also, to stock their limited refrigerated store shelves with them!

The New York City transplants in the area were thrilled with Corey’s pickles. Everyone kept confirming what Corey already knew: his pickles were superior. He was hearing it over and over. His customers found nostalgia in his product, having “flashbacks of being a kid in the streets in Brooklyn.”  “My pickles make people smile,” says Corey. “I’ve also got kids coming up who don’t know what a good pickle is. I’m hitting every angle.” “When I saw the need was there, I just started going. I was hustling at night after my full time job. I figured, if I was selling a product for someone else, why can’t I sell for myself?” says Corey. Then, the time came: Corey quit his full time job and he’s never been happier. “My full time job made me miserable. I was giving 100% and being treated so poorly. This has been a blessing. I can’t believe it’s come so far, so fast,” he says. Corey’s Pickles currently has about twenty eight wholesale accounts and a local distributor, with all of his accounts within an hour of his home. He’s actively working on “a new label with a bar-code and the whole nine yards,” so he’ll be able to go after larger stores and distributors in the near future.

“The CoolBot was a saving grace. I had gotten to a point where I’d get the pickles and put them on ice in those 120 quart Coleman cooler. I’d load those boys up, sometimes fifteen full of pickles! And those coolers aren’t cheap! I was constantly 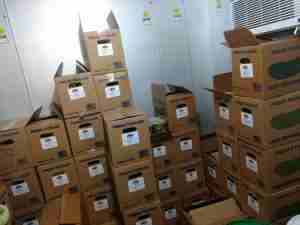 wasting money on ice. I toyed with the idea of getting an ice machine, but it wouldn’t be able to keep up,” Corey explains. He was going back and forth with the idea of getting a cooler, but the cost was extremely prohibitive. “I didn’t have $10K laying around to invest in a cooler.” It was around this time that Corey’s buddy found the CoolBot online. “Dude, look at this cooler! The reviews are crazy, people love it!”  So Corey thought he’d give it a shot. And it “made magic happen.” Corey got his CoolBot for about half the cost of what he’d have to pay locally to get a full sized walk in cooler installed. “It allowed me to breath and gave me a piece of mind. I needed it for two years by then. And at such a reasonable cost, the CoolBot didn’t break the bank. I’m so happy with the thing, it’s awesome!” Corey’s CoolBot stores one hundred cases total, plus several five gallon buckets. He’s quickly outgrowing the space already and will likely need a bigger cooler in the future. “I never ever imagined that things would go the way that they’re going. I’m having people reach out, wanting to invest in me, but I’m still trying to do it all on my own,” he tells us.

“CoolBot is all around high quality product for small business investment, which — for a guy like me, who left their full time job — made it possible for me to get me off the ground.”

“This cooler is half the reason I am where I am,” Corey says. “I love the actual CoolBot sensor, itself. The technology is so cool. And it gets cold very quickly, I’m amazed by the insulation. It’s a really high quality cooler, and the lighting is perfect. Plus the customer service is outstanding.” Why are cold, crunchy, delicious pickles in the Hudson Valley (NY) region so hard to find anyway? And how do cold temperatures impact the pickle flavor and texture anyway? “It’s like any other food product you see,” says Corey, “if it’s on a warm shelf, it’s loaded with a bunch of preservatives. It can sit and be warm on the shelf for years. Pickles are different though, with vinegar and salt being natural preservatives. The hard thing in the grocery business is gaining shelf space; refrigerated space is a premium. Dairy and produce are always in these really tight spaces. So it’s a battle. Most companies will produce shelf-stable pickles because it’s cheaper and easier to get space with an account.” And this is just where Corey saw an opportunity. He wanted a cold pickle. “As they sit on that shelf, don’t think they’re not getting mushier. Those pickles have been sitting there soaking up that juice for god knows how long. Pickles want to be produced cold from Step 1 to Step 20. They’ve got to be temperature regulated. I could put my pickles on a warm shelf if I wanted to, but the quality won’t be there. My pickles are always cold and crunchy. Always. And I’ve had lots of success getting onto cold shelves in mom and pop stores after they’ve tasted my product.”  Corey’s Pickles also goes above and beyond the conventional uses for pickles, as a sandwich side or a solo snack. Their website includes links to various pickle recipes, including pickle dip, pickle martinis, pickle crescent pinwheels, pickle roll ups and Corey’s favorite: pickle pasta salad. “You soak the pasta in pickle brine, chop up sweet and spicy pickles and they add both a kick and sweetness!” says Corey. “I like to include the recipes that my family loves on our site for our customers to share and try out.” Corey’s favorite thing about his newly founded pickle business — aside from the pickle pasta salad — is that fact that he’s reaching a point where he can start giving back to his community. “My business is always going in twenty different directions. From the farm markets and home delivery to street fairs… and now, all of a sudden, my fundraising is starting to explode!” he tells us.

“I want to give back anyway I possibly can, as soon as I am able. And now I’ve been booking fundraisers with schools, clubs, the local fire department. They’re selling my pickles and helping me grow my brand, and I’m giving back to them in return by donating 40-50% of everything they sell back to them. To be able to do that is amazing!”

For example, Corey just wrote a check for $1200 to a local soccer team. “I never imagined I’d be able to do that! And inquiries just keep flooding in. People have been selling cookies and popcorn to fundraise for years, and people are sick of the same thing!” His friends and family encouraged Corey to get more into fundraising, making the point that he was “hustling a million other ways, why not try it.”  “The fundraising is truly my favorite thing to do in my business. The feeling you get, being able to give back and present checks to these kids… I never thought I’d put so many smiles on people’s faces with these pickles!”