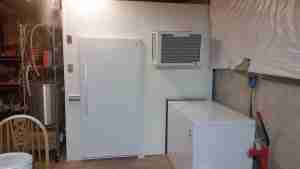 By day, Matt Zajac puts his advanced chemistry knowledge to work as the Director of Chemistry Technology and Automation at a major pharmaceutical company.

By night (and by weekend), he applies those same skills to perfecting the homebrewed Vienna lager that has become a family favorite.

Zajac started homebrewing earlier than most — before he was even old enough to buy beer. An aspiring young chemist, he did some research into the brewing process and thought, “Hey, I can do this.” So, he went to a homebrew shop and purchased a $50 kit that came with everything he needed to get started. “I’ve been doing it ever since,” he says.

Zajac’s passion for brewing didn’t just provide him with delicious beer. It also helped him bond with the woman who would become his wife. (Single people, take note.) “I met my wife, Holly, in undergrad,” he says. “One of our first dates was to homebrew a batch.”

During his graduate studies and postdoc in chemistry, Zajac took a short break from his homebrewing hobby. Then, he “got a real job,” he and Holly bought a house, and he decided to get back into it.

By then, he’d outgrown the $50 beginning brewer system. So, he outfitted his basement and built a whole new system from scratch. The result was a one-tier, three-pot system similar to the BrewScuptures available from our friends over at MoreBeer!

At first, he was using chest freezers for his fermentation unit. It worked fine, but then his father-in-law got a taste for Zajac’s Vienna lager, which also happens to be both Matt and Holly’s favorite. He needed to scale up his production to meet his family’s demand, which meant he needed a different temperature control system. He bought an upright freezer, but after a year, it died. He was back to square one.

All brewing requires precision. But Vienna lager is particularly finicky, especially the way Zajac makes it.

It starts with specialty malt products from Weyermann. Zajac has a lab in his basement, where he does his own propagation and brings the yeast cell count up to what he needs. Then he does a viability test. “I’m very careful about my pitch rates,” he says.

The fermentation process requires very tight temperature control, which is made even more complicated because it’s a ramp. He pitches the yeast at 44°F, then ramps it up to 50°F over three days and leaves it for a week. Then, he ramps it up to 62°F over five days and holds it there for three days. Finally, he drops the temperature three degrees per day until it reaches the mid-30s. 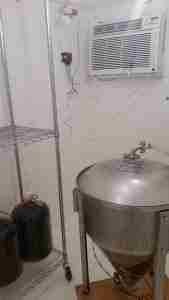 The goal is to control fermentation byproducts, like diacetyl. These byproducts impart a buttery flavor, which is not desirable in this type of beer. “If you don’t accurately control the temperature,” Zajac says, “you don’t allow yeast to convert the byproducts into flavorless compounds.”

This isn’t the only specific requirement Zajac had. He also needed something big enough to fit his conical. So, he started thinking about a walk-in. “The walk-in cooler was attractive since it could accommodate all of my cooling needs, so I could do away with my chest freezers,” he says. “But the price was a serious deterrent since even units in mediocre shape were ~$4000, and new units were twice that.”

Zajac looked online, and that’s how he found the CoolBot. Although he had no experience in construction, he thought “the project looked like a lot of fun.”

He made a few trips to Home Depot and went to a builders auction, where he got a great deal on insulation (“I would have paid ~$1000 at Home Depot, but the builders auction practically gave it away”). In total, he spent $2100 building his walk-in cooler, which he notes was significantly less expensive than the alternatives and also allowed him to design it to the exact dimensions he needs. 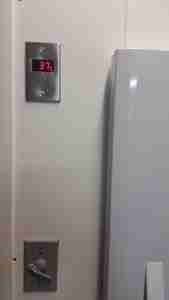 So, how does he achieve the ramp required for the lager? He keeps the cooler at a steady 37°F and uses radiant floor heaters taped to the conical to control the temperature ups and downs. About the CoolBot, Zajac says: “It’s really robust. I haven’t had any issues with it. I plugged it in. It worked right out of the box, and I haven’t looked back.”

In addition to making their own brew, the Zajacs are also both BJCP (Beer Judge Certification Program) certified. They judge brewing competitions together at least four times a year.

This means he gets to try some pretty interesting brews, which can be both very good and very bad. For example, Zajac notes that one year at the National Homebrew Competition, he tasted a beer made with Spam. “It was the worst beer I’d ever had,” he says. “It was so disgusting.”

On the flip side, he notes that there are some excellent things happening in the sour beer category. He’s had a beer made with fox grapes (common in Pennsylvania) aged in French oak that he says was “very unique, very delicious.” He also tried a brew that was aged over berries and soured in a rum barrel for three years. “It was incredible beer,” he notes. “It ended up winning first or second in Best in Show.” Sounds delicious!

If you’re in southeastern Pennsylvania and would like to learn what’s new and exciting in the local homebrew scene, check out Bruclear Homebrew Club, where the Zajacs are members. They hold regular meetings, attend and host events, and have a growing library of resources for essential brewing information.