John Helms doesn’t personally own a CoolBot. But he is deeply familiar with our products, installing them regularly at his business building custom refrigerated trailers for clients at American Trailers of the Carolinas Inc. Helms’ trailers are sold all over the country, from Texas to Oregon, Pennsylvania to Illinois, and Florida to New York.

“My product is really interesting,” Helms says. “Yes, I’m more expensive than building your own but the quality makes it worth it.”

Helms discovered an underlying need for refrigerated cargo van trailers for entrepreneurs who “aren’t quite ready for big and expensive equipment,” such as caterers, hunters, small farmers, etc. He set out to build a first generation trailer “from the ground up,” before he got into retrofitting existing trailers. Helms learned about CoolBot on the good ol’ Internet, as most people do. “I essentially had four refrigeration choices, CoolBot being by far the most economical option,” he tells us.

“CoolBot ended up being a nice supplement to my business. We do turn key solutions and also occasionally install CoolBots on people’s existing trailers,” Helms says.

A majority of Helms’ trailer builds are upfitted, where he takes a trailer, strips it totally out, removes its lining (“everything but the floor,” basically). From there, he starts with a clean slate.

Helms’ customers range from hunters and produce farmers to brewers and caterers. He once made a mini tailgate trailer that held up to five kegs with tap lines. He’s outfitted trailers for food vendors to use as backup refrigeration for big festivals. He’s even put together trailers for nonprofits that have received grants to teach small farmers to use in the field in order to immediately refrigerate fresh product in order to maintain freshness.

The State of Virginia once hired Helms to build them a trailer in order to teach hunters how to dress a deer after a hunt in the woods. 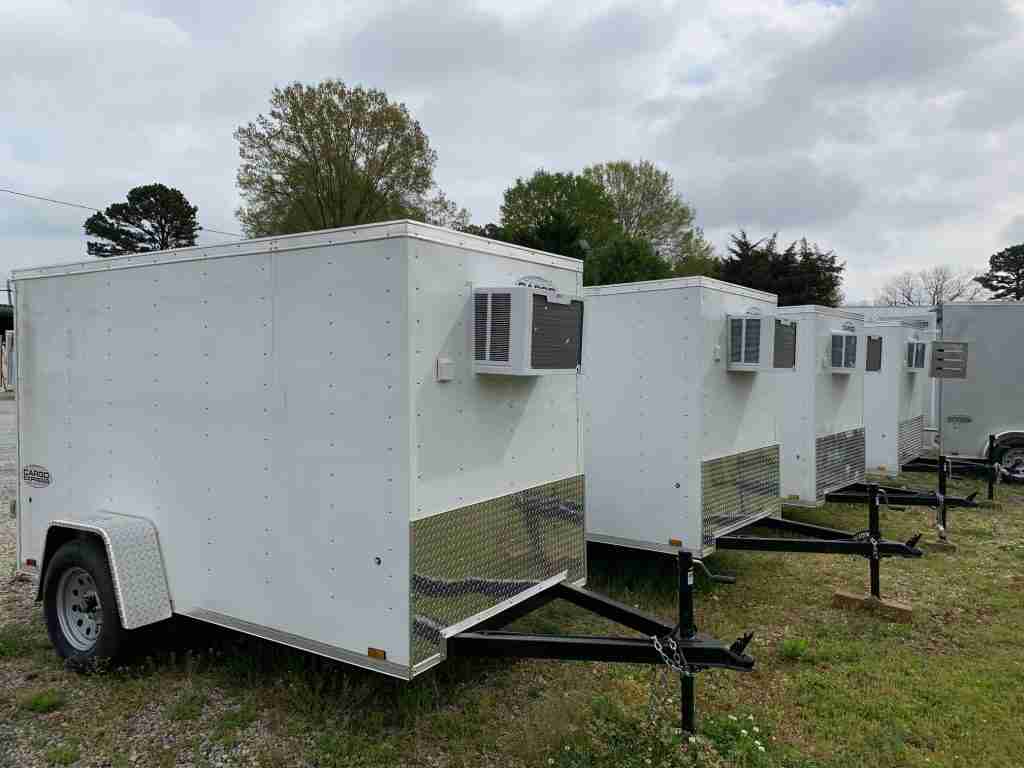 The trailers Helms typically outfits are 12 feet and under. This size allows his clients to maintain his recommended voltage of 110, which he claims “makes life simpler.” He tells us that once you get to over 12×6 feet in size, you “start to push the envelope on the capacity of getting (and staying) cool.”  Helms’ business adds some specialized features to their trailers that a lot of people don’t.

First of all, they use seamless liners. “Each wall is seamless, with one piece of liner sealed all the way around the edges,” he explains. And apparently it’s hard to find the whole pieces of liner, so most people building their own trailers don’t do this.

Regarding insulation, Helms uses polyiso foam with an R value of R5.7/inch thickness. “Spray foam goes on about 5-6 R value, but spray foam also “gases off” and loses the propellant and foam degradation after a few months,” Helms educates us.

“In commercial trailers, they spray foam but they’re really “jet foaming,” not really spraying and shaving. They control the density by having a sealed cavity that they inject the foam into, so it doesn’t gas off at the same rate. Then they flatten it out to put the liner on, but because it’s not sealed it still loses R value. Blue foam is actually higher value than the spray foam.” 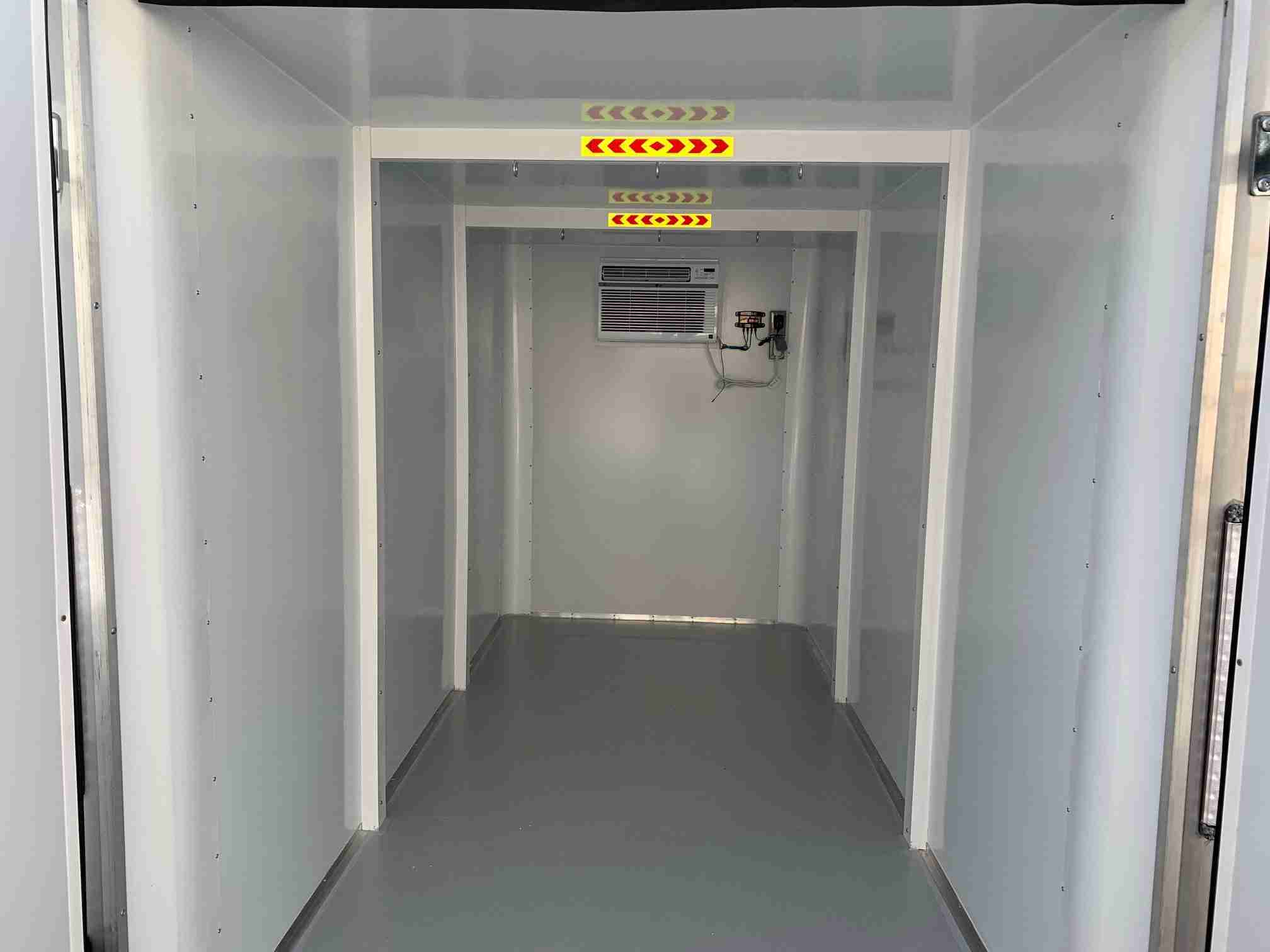 Also, there are no heat transfer points from their trailers to the outside to speak of. That means no fasteners that go from the inside to the post. “Whenever you’re fastening a liner, you’ve got to fasten it to something to make it stay in there, but from a heat standpoint, they’re transferring heat from every fastener.”

“Most people use a lot of wood when building out a refrigerated trailer,” says Helms. “That’s just the nature of refrigeration.” But wood sucks up moisture — even if you use waterproof glue panels — and then all kinds of things happen, like rot and mold. “So also from a sanitary standpoint, building the trailers the way we do is quite different.”

We always advise people to take out all the wood, as we discuss here in our DIY trailer video.  Helms’ trailers are extremely professional and very polished, to say the least. 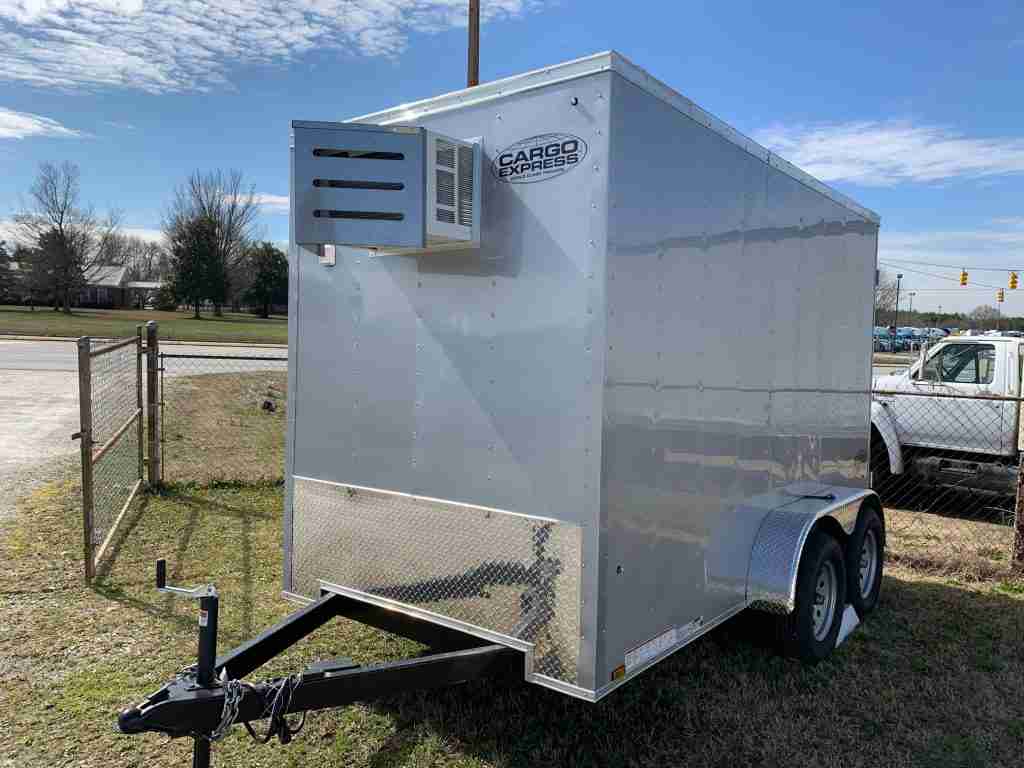 One of Helms’ more curious builds involved a live crab trailer. His client started out with an A/C on the roof of the trailer. He had an air conditioned space to keep the crabs alive. “He came to me because it wasn’t working well enough. It was an 18 foot trailer divided into two sections: storage for live crabs and a section for live event steaming on location. He didn’t want to buy a new trailer, so we retrofitted it and left the old A/C in it. It was not an easy switchover,” tells Helms.

His client’s previous temperature limitation pre-CoolBot was 60 degrees, because that’s just as low as the A/C went. “The first day after I installed the CoolBot, the trailer was in the high 40s,” Helms says. And that was before the insulation was even installed! His client ended up being very pleased with the results of his cool(er), improved trailer. “The only trouble he ever had was when he was washing out the trailer… and had the power on still. He sprayed the CoolBot power supply! I think he learned a valuable lesson: UNPLUG THE POWER BEFORE CLEANING!”

“Another trailer we did was a hanging deer trailer for the state of Virginia. They had a trailer in stock, so they could hang deer from the ceiling. We put a CoolBot unit on it, made them a deal and now they’ve already referred us to several different people,” Helms tells us.

One of Helms’ favorite trailer builds was for a charity made up of Kentucky Hunters for the Hungry, a “charitable volunteer run organization comprised of responsible hunters and conservationist who encourage hunters to harvest and donate deer each season.”

This statewide hunger relief program aims to alleviate hunger and malnutrition “by processing and distributing donated venison to those in need.” Helms gave them both a discount and a donation. “One of their trailers has to be frozen, so one will have a CoolBot and the other won’t,” he explains to us. 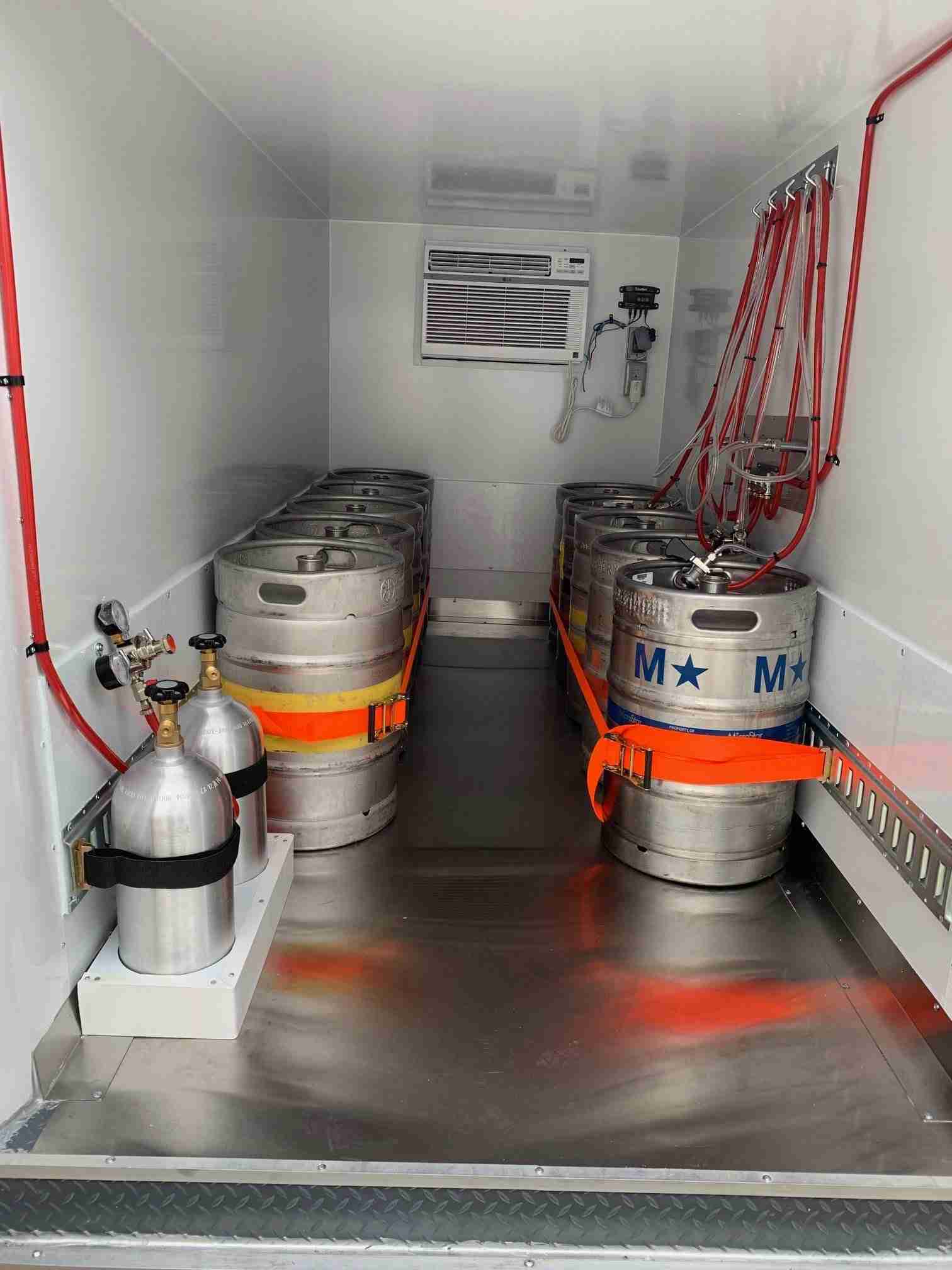 We were curious whether Helms’ mobile coolers are running off inverters or generators. Helms explains to us that his business recommends an inverter generator. “Typically we tell them to go at least 3600 watts,” he says. “If a regular generator, I tell them to go at least 6000 watts. You don’t want the generator struggling. The inverter helps that. I don’t see many vehicles being able to handle the wattage when you plug it into an inverter. It’s possible, but I try to stay out of the actual purchase of the generator… because if anything’s going to go wrong it’s the generator.”

Learn more about sizing your inverter or generator here.

Helms also developed an air deflector for the front of his trailers because “if you don’t watch out, the A/C fan blows out and when you’re going 70 mph down the highway… and you don’t want that.” Helms warns us that you could burn up your fan without even thinking about it.

“Most people don’t realize that or even think about it. You just need a nose cone of something, it doesn’t have to be too elaborate. Even a grill breaks up the air enough at certain speeds.” When we asked Helms if he intends to own a personal CoolBot for any reason in the near future, he tells us he’s currently working on a small trailer for his son that will be a hot dog vending trailer that he may outfit with a CoolBot.

He’s also working on a prototype for a truck slide with the ability for a Bobcat or forklift to slide into a 4 ft x 6 ft x 8 ft with a CoolBot for a portable cooler. This way, the refrigerated trailer can sit on the ground and hold cold product but can also be transported to markets, etc. inside a pickup truck with a generator on the back.

We get requests for this type of product all the time, so it’s really awesome that Helms, a refrigerated trailer guru, is cooking something up for our eager customers. He’s hoping to have his prototype ready for testing in mid July. Everyone from hunters to produce and cut flowers farmers have requested a product like this one, so we look forward to seeing how it turns out.