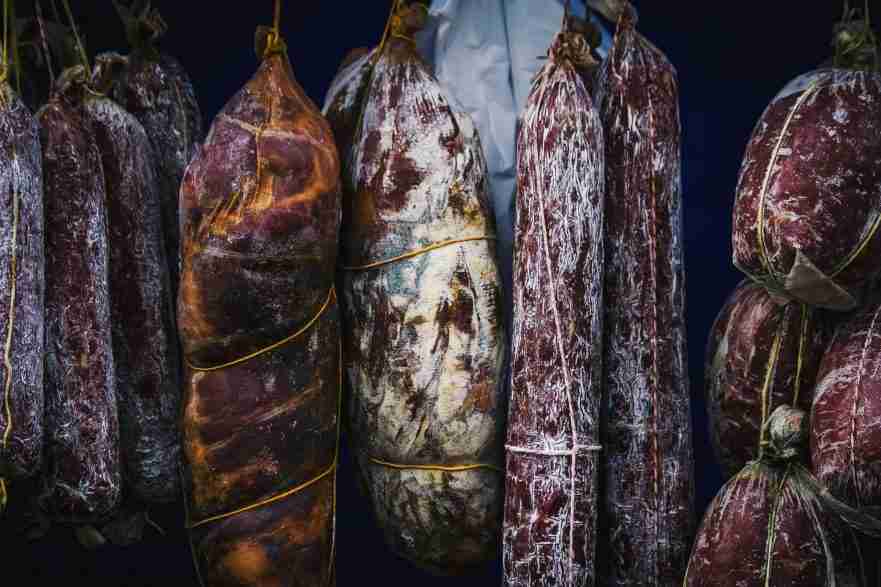 Cured meat seems like a terrific counter to meat’s limited shelf life. But how long does it actually last? Here we’ll dig deep into the process of curing meat, why it works as a method of preservation, and learn how long cured meat lasts.

What Is Cured Meat?

Essentially, cured meat is a way of increasing the product’s shelf life. While the primary purpose is preservation, curing meats is also a means to add and enhance flavor. Some common types of cured meat include bacon, salami, prosciutto, pancetta, Spanish chorizo, and pepperoni. But with dozens of varieties of cured meat from all different cultures, the list could go on.

When meat and fish spoil, microorganisms are mostly to blame. Molds and bacteria will break down the fats and protein until the product reaches a level unsafe for human consumption. What is one thing that these pesky microorganisms need to grow? Water.

That’s where the process of curing comes into play.

To cure meat, salts or smoke are used to draw out the moisture in the product. Through the process of dehydration, the meat becomes less suitable for molds and bacteria to grow. Thereby, the shelf life of the meat is extended. There are a few different processes of curing meat. We’ll go more in-depth into wet and dry curing here.

Because of its relative simplicity, coupled with the necessity of food preservation to support civilization, the curing process has been around for quite a long time. It’s unclear exactly how far back the practice goes, but there are records of meat curing amongst the ancient Greeks. Even then, the salt contained impurities such as nitrates which ended up being a happy mistake. Nitrates both enhance the flavor and color of meats along with antimicrobial properties that help preservation.

Records of cultures curing meats are found throughout history and around the world. There is truly a wealth of cuts, processes, and flavors – it’d be challenging to run out of options. Needless to say, the process is tried and true.

Perhaps the most basic type of curing, dry curing uses a combination of salt, nitrates, and flavors. The process pulls so much moisture out of the meat that microbe growth is reduced to less than 1%. To dry cure meat, you essentially bury it in salt, then hang it up in a cooler for long term preservation.

Equilibrium curing is an option if the amount of salt for dry curing seems too crazy. Use about 3% of the cut’s weight in salt, then vacuum seal it for at least five days. This is one of the more accessible methods to try at home!

Also called brining or sweet pickling, this process uses a combination of salts and sugars to preserve the meat. Additionally, you might use different types of nitrates, phosphates, and other flavorings to inject into the meat. The addition of sugar supports the growth of the beneficial bacteria, lactobacillus.

But isn’t curing meant to prevent the growth of microbes?!

Yes… However, lactobacillus produces lactic acid, creating an environment too hostile for harmful microbes to grow. Wet curing is one of the more popular methods of curing hams.

While the meat is cured, don’t chow down immediately. It still needs to be cooked before eating.

A true delicacy, meat can even be cured by smoking. Essentially, the smoke creates an acidic coating to the meat, preventing bacteria from growing. Additionally, the smoke dehydrates the meat, continuing to create a hostile environment for microbes. Hot smoking uses temperatures around 160°F for shorter periods of time. On the other hand, cold smoking is where shelf life really takes off. Using cooler temperatures (less than 100°F), the primary goal is dehydration, and the end result can last much longer.

How Long Does Cured Meat Last?

While cured meats do extend the shelf life of cuts, the meat still won’t last forever. So how long will cured meat last? The answer is that it varies depending on the process and technique.

However, for all cured meats, once the packaging has been opened, the introduction of oxygen will immediately reduce the shelf life (sometimes to even as little as a few days). Here are some of the shelf lives of some of the more popular cured meats.

Some processes of curing cuts can allow the meat to be shelf stable. This essentially means that the food can sit out at room temperature for extended periods of time without spoiling. Talk about living off the land! To create shelf stable products, the meat must be heated or dried enough to prevent bacteria growth. Only the most dehydrated cured meats will fall into this category. The prime example is jerky.

Whichever process or cut you choose, check the individual shelf life for the product, and enjoy your charcuterie board!