Michael Crain was inspired during his time spent working in the meat department of his local grocery store in Doniphan, Missouri. He loved his work and dreamed of having his own personal meat shop where he would raise the animals himself, controlling precisely what they ate and ensuring no antibiotics contaminated his product, generating healthier food for himself and his family to consume.
Michael and his wife — high school sweethearts who will be celebrating their twentieth wedding anniversary this spring — share the ultimate goal to live off-the-grid, becoming entirely self sufficient. 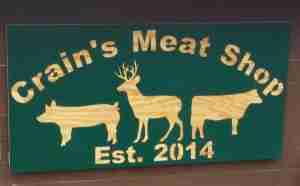 His dream became a reality last year when Michael purchased four Yorkshire pigs to raise and butcher from a nearby Arkansas hog farmer. His wife named the pigs after seasonings and root vegetables: Parsnip, Sage, Rosemary and Thyme. Michael spent July and August fattening up his brood, feeding them about four pounds per day of ground corn. While it’s easy to become emotionally attached to the piggies after regularly feeding and watering them day after day, Michael tries not to get too attached… since they are his supper, after all.
When it came time for the slaughter, Michael’s smallest pig weighed in at 220 lbs, while the biggest was a whopping 329 lbs. (They were each only 25 lbs when he got them!) Michael uses every bit of the pig, from nose to tail, with the exception of the hide. Last year’s biggest pig yielded 8 pounds of ribs, 28.5 pounds of breakfast sausage, 24 pounds of pork chops, 32.5 pork steaks, 26.5 pounds for ham to cure and 25.5 pounds of bacon. Michael also keeps all the fat and cooks it down slowly, rendering it into lard — resulting in about 4-5 gallons per pig.
Now the question was: Where to store all of this swine? 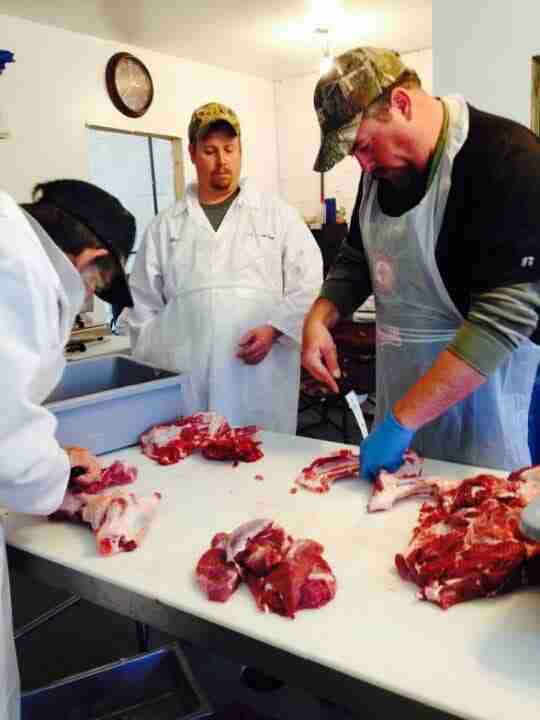 For all of that pork — plus the 2-3 deer that he seasonally hunts each year — Michael was in need of both an area for his butchering equipment and space for meat storage. He constructed a 27×22 building with a 10×5 walk-in cooler inside of it, where he would hang the animals after they’d be slaughtered. When he initially built his meat shop, Michael planned on installing a commercial cooling unit. He was a bit dismayed by the $4,800 price tag for the unit, plus installation.
That would put quite a dent in anyone’s piggy bank. Utter hogwash, if you ask us.
Then the local chiropractor told Michael how his daughter was using a CoolBot in her flower shop and loved it. Michael did some research, quickly realizing that he would save lots of money in the long run with the CoolBot, versus a commercial unit. Both Michael and his wife are school teachers, and they’re happy to save money where they can.
“After doing the cost comparison, hands down, the CoolBot wins one hundred times over,” he points out. Michael ordered a CoolBot unit, which he’s been running for about a month now and couldn’t be happier with the product.

He’s extremely pleased with how well the temperature controlling apparatus works, too. Michael loves how his CoolBot maintains the desired 34°F to store his meat. During the curing process, he will adjust the temperature to a steady 38°F.

“How they ever figured out that little bitty controller to hook up to the A/C, I don’t know,” Michael deadpans.

The CoolBot has also allowed Michael to greatly speed up his butchering process. While he used to be able to do just one pig per day, now he can kill all four pigs in one day. He’s got the space to fit all four pigs in his large cooler, which allows them to firm up overnight. This makes it much easier to cut them up the following day.
“Lots of friends want me to butcher meat for them and use my storage, but just want to keep it personal,” Michael tells us. He doesn’t want anyone else hogging all his brand new cooler space.
Michael appreciated how easy the CoolBot was to install, explaining how it took him just five minutes to put it together and have it up and running. “I like that it has adjustability for the heat sensor and the sensor on the coils to keep it from icing up,” he explains. While he hasn’t had any issues at all, he likes how there is an adjustability function, just incase. 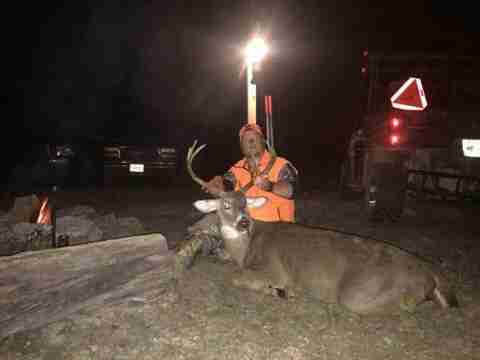 Michael and his wife have plans to move back to Alaska, where they spent time teaching a few years ago. He’s recently applied for the position of principal at a K-12 school in the fly-in, remote native village of Nanwalek with a population of just 250. If their plans pan out, Michael and his wife want to buy property in Homer and build themselves a house there, complete with a new walk-in cooler and new pigs.
As for whether or not Michael’s CoolBot will make the move all the way to “The Last Frontier”?
“I will never be without CoolBot,” he assures us. “It’s such an amazing product.”