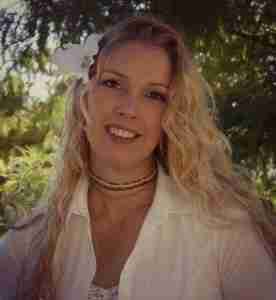 I thought I was busy. And then I met Marissa Ames.

On the day I interviewed her, Ames was working on her latest novel for NaNoWriMo. She’s written a medieval fantasy series with rave reviews and has a nonfiction healthy eating book in the works. She writes for Backyard Poultry and Countryside Magazine and has a homesteading blog on Countryside Network. She also has her own blog about life on the farm — complete with livestock — where she raises much of her family’s food.

Did I mention that she works four days a week as a massage therapist, is working with a charity that helps educate and empower girls in Africa, and is rearing two teenagers?

And, believe it or not, when I talked with her, she seemed calm!

Ames describes herself as a “pretty commonplace woman.” In reality, she’s anything but.

Ames traces her homesteading history back to when her ancestors crossed the plains in the late 1800s. Their philosophy was: “Go break a sweat. Don’t expect someone else to do your work for you. Get out there and get it done.” When Ames and her husband started to struggle financially, Ames decided it was time for her family to put her ancestors’ philosophy into serious practice by providing their own food.

Today, the Ames family rents a ⅛ acre lot just outside of Reno, Nevada. And they make the most of every square inch. 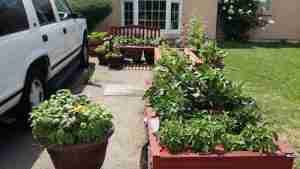 In the backyard are the rabbits and chickens the family uses for meat. The front and back driveways are filled with planter boxes. Ames has developed her own system for how to build and fill 4’x4’x2’ planter boxes for $20/box. They manufacture their own dirt, make their own cheese and sausage, and recycle everything.

For crops, Ames says she selects what to grow based on “the maximum production I can get that will feed two teenagers.”

All of their food is organic, and it costs just a fraction of store-bought organics. According to the USDA, the food budget for her family of four to eat organically should be in the range of $1,200 to $1,400 per month. She spends $200 a month plus about $70 for animal feed. That’s a savings of about 80%.

It’s no wonder that Ames has become something of a local hero. She started by teaching her friends basic homesteading tasks, like how to can juice, make cheese, and take care of chickens. That quickly expanded to working with the local community, which got the attention of both print and online publications. “I had opportunities and I grabbed them,” she says.

Those opportunities have expanded around the world. Ames recently became involved with She Talks to the World, a charity whose mission is to educate and empower girls in Africa. The charity has a girls’ school in Zambia, and Ames is joining the team as a garden consultant. She’ll be traveling over there several times a year to teach them how to grow their own food as well as saffron as a cash crop. She’ll also be writing a book about the program and donating 100% of profits to the charity.

Speaking of writing — Ames may be a master homesteader, but what she really loves is being creative.

Remember that novel from NaNoWriMo? It’s a thriller about a homesteading mom living in Reno tasked with saving our food supply from domestic terrorists.

She’s also currently working on a book called Eat It Like You Grew It. It’s a natural, sustainable, healthy diet plan based on the premise that “God or Mother Nature (or whatever you want to call it) has developed the perfect diet, with the right nutrients and calories available at the times we need them, as long as we eat as if we had produced everything ourselves.”

“Even if you live in an apartment,” Ames says, “you can eat as if you grew everything yourself.” That includes eating seasonal vegetables and sustainable meats (like chicken and rabbit instead of beef), and staying away from refined sugar.

If all goes well, Ames plans to finish the book by April. After that, she’ll start work on a companion planting guide that tells you how to grow and produce the foods she recommends.

(I know what you’re thinking. But what does she do in her spare time? The answer is: she paints!)

I’m sure you’ll agree that the word commonplace doesn’t at all describe Marissa Ames. She’s an inspirational example of what you can do when you live by the philosophy “Get out there and get it done.”

Ames recently started a CoolBot project on her farm to provide more space for storing produce and curing meats and cheeses. And over the next few months we’ll be checking in to see how that project — as well as her new books and charity work — are going. Until then, be sure to check out her blogs and fantasy novels. You can also follow Ames Family Farm on Facebook.