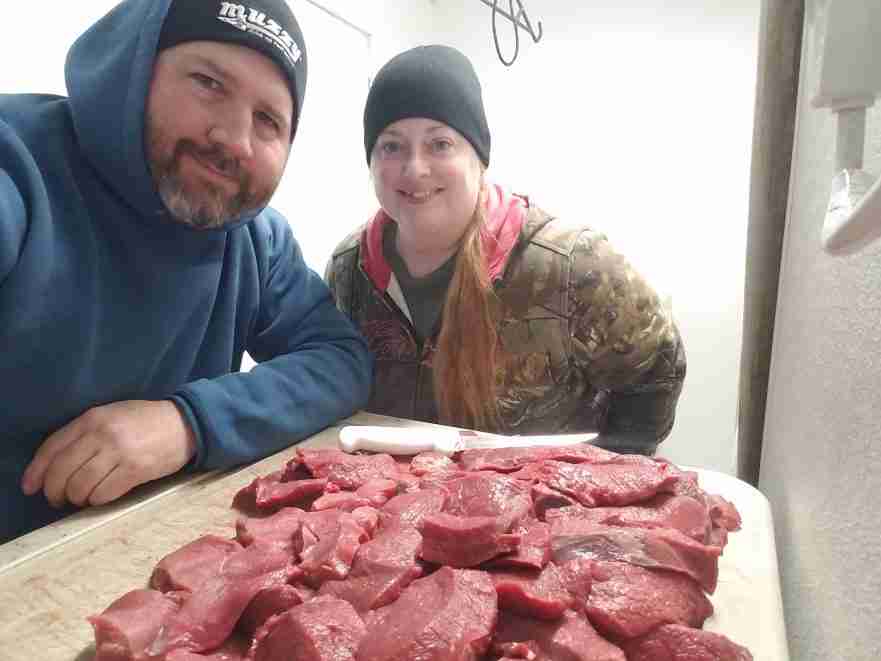 Dustin Apple – or you might recognize him by his YouTube handle Whiteriverrambo – and his wife Amy have both been bow hunting since the nineties. Dustin is actually celebrating his 30th year bowhunting. They reside in Southern Indiana and are “year round avid sportsmen,” hunting deer, turkey and fish. Their diet consists mainly of this meat, in addition to corn, beans, tomatoes, etc. that they harvest from their small garden.

“We are 100% venison,” Dustin tells us. “We never go to the store and buy cow [meat]. It’s overpriced and it sucks, with all the stuff they shoot into it. That’s not what we’re used to. We live off of our deer meat.”

They do all of the processing and cutting themselves in their self-built CoolBot walk-in  mini barn. Amy does a lot of jerky in the dehydrator and also preps ground burger meat. “Between the two of us, we usually get three or four deer each season. That will last us a while. We’ve always got meat,” says Dustin.

Dustin and Amy are celebrating their seventh season with their CoolBot, and “since they built it, it’s been straight freedom ever since,” according to Dustin. Once he heard of CoolBot, he watched a few videos online of people putting theirs together. He knew they had the space for it, if they could just maneuver a few things around. So Dustin freed up some space in their mini barn and went about researching how to best turn the space into a walk in cooler.

“It’s an older building with a concrete floor, which is perfect. The floor is a big deal. I watched some videos to learn about how to get my R-value up enough and found a nearby wholesaler for materials to build out the walls and lumber for the insulated door,” says Dustin. Amy helped him to clean the area up and assemble everything. They made sure they’d have a dedicated outlet for the CoolBot and wall unit, plus a small 2ft LED light to illuminate the small space. They outfitted their cold room with a few plastic filet tables, which were easy to clean and take care of. Then, the workspace was completed with a new ¾ horse grinder to make burgers.

They only run their CoolBot cooler during hunting season (October/November), when they’ve got a fresh deer that needs to hang and be processed. Dustin and Amy keep a chest freezer outside the CoolBot cooler for meat storage year round, so they’ll generally only plug in the CoolBot about an hour before they know they’ll be using it. Because it cools down so quickly, it allows Dustin and Amy to come home anytime with an animal and know they’ll be able to have a clean, cold space in which to store it – even during warm, fall Midwestern days.

“Having the ability to put something down, put it in the truck, plug in the CoolBot and have the room down to a tolerable temperature within the hour – no matter how hot it is outside – it’s pure freedom,” says Dustin.

“When we’re not actively using the CoolBot, it stays clean. We don’t use it for storage. We just clean it out at the beginning of each hunting season. And in Indiana, it might be 80 degrees all the way through Thanksgiving, but with CoolBot I don’t have to worry about that.”

While Dustin has been bow hunting for nearly three decades, he’s still fairly new to processing. “After we got the CoolBot, I went over to a friend’s place who has been a processor for, like, 30 years. I told him I’d work for him for a couple of days in exchange for processing lessons. We cut deer from daylight ‘til dark for a few days, and I learned it all – from sharpening a knife to everything else.”

Now Dustin and Amy “take care of it all together, from field to freezer.”

“I’ve used the CoolBot to try all sorts of things with venison: hanging an animal overnight versus through the weekend before processing, using it just to firm up the meat prior to processing, attempting to age venison 9-10 days, etc. I found very little difference in the meat, as far as flavor, aging and texture goes,” tells Dustin. “I’ve found anytime after two days, you’re pretty much good to go [to begin processing].”

“But, with life and work and everything that happens,” Dustin explains, “if you’re not ready to cut that up after two days, let her hang and get to it when you get time. We’ve had times when we’ve been setting up a large deer – we don’t do that many, so we’re not that good at it – and spend a couple hours doing it… and it’s exhausting! So we’ve just left everything in the CoolBot and come back to finish it later. And that works, too.”

And therein lies the beauty of the CoolBot.

In front of the barn, on the eve, Dustin has a water hose and gambrel system to hang the deer and clean it before bringing it into the CoolBot cooler. “I like to make sure everything’s clean from field debris, leaves, excess bodily fluids or entrails. I rinse it and clean it as well as possible before it goes in the cooler to minimize bacteria. That’s a huge step. Especially if I don’t know how long I’ll leave it hanging. Anytime you get the carcass down below 50 degrees, it will stop the growth of bacteria. We set our cooler somewhere in the mid-30s, which gets the meat down below 40 degrees. This also makes the meat firmer and easier to process. I just love it.”

Before they invested in their CoolBot, Dustin was constantly hitting up his buddy, the meat processor, when he killed a deer. Sometimes it was after dark and his friend’s gate would be locked, or he’d be turned away because there was no space in his buddy’s cooler. Yes, Dustin and Amy had a chest freezer, but often he was left with nowhere to take the freshly killed animal. Plus, using a processor is an added expense and – unfortunately – you don’t always necessarily know what you’ll be getting back. And there’s the hauling the animal back and forth to the processor, etc.

Needless to say, having the CoolBot at their home has greatly improved Dustin and Amy’s ability to freely hunt, hang, store and process their own meat.

When Dustin isn’t busy bow hunting with Amy, he runs an aluminum welding shop out of his home called Whiteriverrambo Customs, where he builds unique boats used specifically for bow fishing. He builds these boats from scratch, in addition to doing repairs and remodels on existing boats. Dustin is a popular YouTube personality, posting lots of awesome informational videos about subject matter such as bow fishing and welding to hunting and everything in between – plus one extremely popular video detailing how to build a badass walk-in cooler! Dustin is also the newest host for Weld.com and his first video goes live on August 8, 2022, so stay tuned!