Feeding a family on half an acre is tough. But that’s exactly what smallholder farmers in Honduras are struggling to do.

Fortunately, there’s help. The Feed the Future Partnering for Innovation program, which is a partnership between USAID and Fintrac, partners with private companies to help bring new technologies to smallholder farmers in countries considered “hunger zones,” like Guatemala, Malawi, Mozambique, and Nigeria.

Store It Cold is proud to be a recipient of a Technology Commercialization Grant for Honduras. During the award period (2016-2018), the program aims to bring affordable cold storage to as many as 9,000 smallholder farmers in the country.

“With a global population of more than 7 billion people, feeding the future is a real challenge,” says Michael Dworkis, a partner at the investment firm that owns Store It Cold. “Through the generosity of this program, we have the chance to bring the CoolBot to countries whose populations rely heavily on agriculture and are facing economic challenges. We see the struggles that farmers are having, and we have the opportunity to introduce a technology that brings better economics, saves energy, and helps farmers improve their economic plight. Hopefully we can make a difference in the lives of some small farmers. It’s a really cool thing to be part of.” 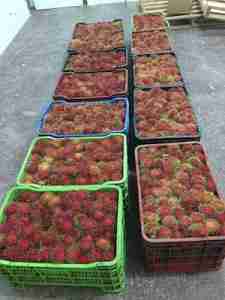 Dworkis recently made a trip to Honduras for a Demo Day, where local farmers got to see the CoolBot in action for the first time.

Cold storage of any kind is out of reach for most individual farmers, so the goal is to sell CoolBots to collection centers, exporters, and cooperatives, where 50 or so smaller farmers might deliver products for aggregation and to move the products downstream. The demonstration took place at a facility that procures, processes, and packs rambutan (a tropical fruit similar to the lychee) for export.

Carlos Iglesias, who heads up Store It Cold’s Honduras operations, says, “It’s a great experience watching people’s reaction to seeing the device work.” At first there’s always some level of skepticism. People are surprised that an air conditioner can reach the temperature level required.

But the skepticism dissipates quickly.

“I have an 8-foot trailer with a CoolBot hooked up to a 12,000 BTU air conditioner,” Iglesias says. “I open the trailer and hand them a cold beverage. They feel the cold and see that the temperature is 3°C to 4°C (37°F to 39°F) in the middle of the day. My job is done in seconds.” 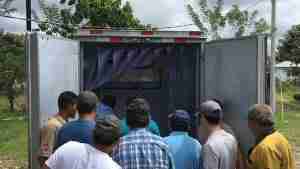 Iglesias observes that without the CoolBot, refrigeration for small and medium-sized producers is pretty much “out of the question.” Farmers have had to be very creative to keep their produce fresh. For example, it’s not uncommon to see farmers moving product at 2:00 or 3:00 am to avoid having to put it in the truck in the heat of the day.

By freeing farmers from the constraints of the midday heat, the CoolBot has the potential to have a huge economic impact in countries where the cold chain isn’t yet developed.

“CoolBot users can keep their produce fresher for longer,” Dworkis says. “This means the reduce post-harvest loss and sell a higher percentage of agricultural production. The more produce sold, the better the economics to the smallholder farmers growing the crops.” 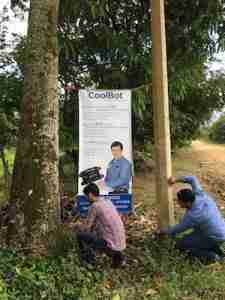 Another area where the CoolBot brings savings is in the maintenance and repair. Iglesias says that for a traditional cooler, “just having someone come and look at it is $90, and that’s before doing anything.” In contrast, “replacement parts for an air conditioner are dirt cheap.”

Of course, the goal of the overall program goes well beyond just cost savings. The objective is to better the lives of smallholder farmers.

“Smallholder farmers are an at-risk population,” Dworkis says. “They’re strapped for capital. It’s easy to become trapped in a cycle of debt to their seed and fertilizer suppliers, just trying to earn a small margin on a season’s production. The Partnering for Innovation program isn’t about giving handouts. Rather, it helps introduce agricultural technologies to the supply chain in a sustainable, free market way, which ultimately enables smallholder farmers to improve their economic position.”

Iglesias also focuses on the big picture benefits: “The CoolBot breaks down the barriers for small and medium producers to thrive. It’s a positive step for the development of the food industry in the country as a whole.”

Throughout the rest of the Technology Commercialization Grant award period, we’ll periodically report on the project’s progress. So, check back often to learn more!