Kristen Lindelow has your dream job. She’s a wine judge. Yes, you read that right. She gets paid to travel around the world, taste wine and then rate it. But she wasn’t always such a lush (kidding!).

Once upon a time, Kristen had a full time career as an operations manager for Underground Atlanta, Inc. before moving to Orlando where she was the project coordinator for the Lake Nona P.U.D.

When she and her husband had their two daughters, she made the choice to leave her profession and stay home with the kids, homeschooling them as her family moved around a lot with her husband’s job. Once the girls were in high school, Kristen started to think about working again.

“I didn’t want to work for anybody else ever again,” she admits.

She had met some women in the American Wine Society who had suggested she could be a wine judge. Having always been a wine connoisseur, Kristen’s ears perked up at this notion.

“I’ve always loved wine and appreciated tasting, understanding and learning about it,” she tells us. So she applied and took the exam, entering into a three year program to get her certification as a wine judge. 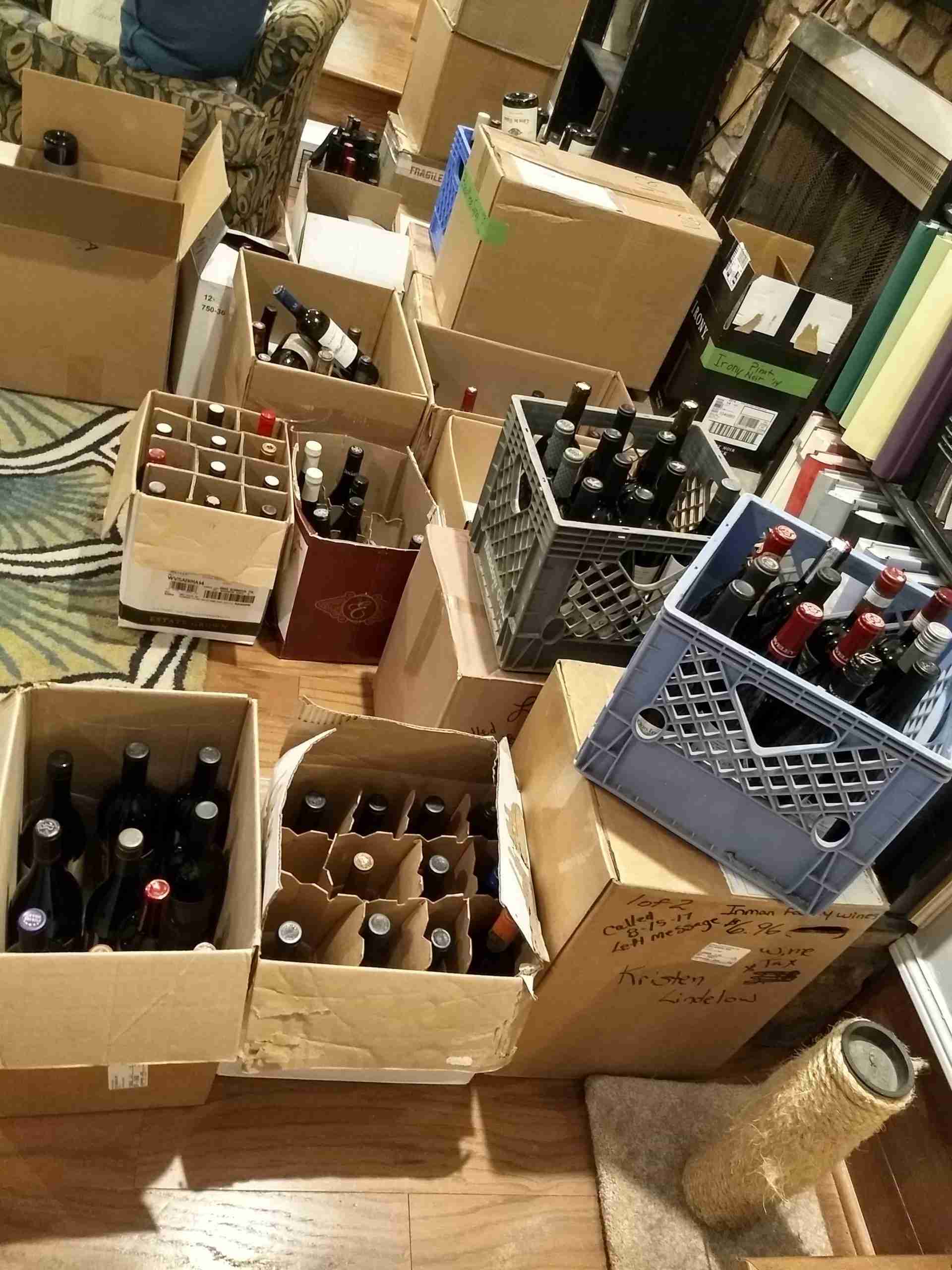 So in 2011, Kristen began judging smaller, local competitions, eventually moving to large international ones. She’s been everywhere from Denver to Paris and lots of places in between. “It’s been a lot of fun,” she says. (Obviously).

Over the years, Kristen has taken additional courses to become a wine educator. She’s collecting wine-themed resume titles — such as French Wine Scholar and Certified Specialist — about as fast as she’s filling her 6×10 CoolBot Walk-in Cooler with bottles of Bordeaux.

About two years ago, Kristen started the Tennessee Valley Wine Academy, where she teaches wine education classes on various topics. “I do classes on specific regions,” she explains, “as well as host classes for the Life Long Learning Institute, teaching retired folks about wine.” She travels to cities throughout the United States, giving presentations and tastings to students and enthusiasts, alike. 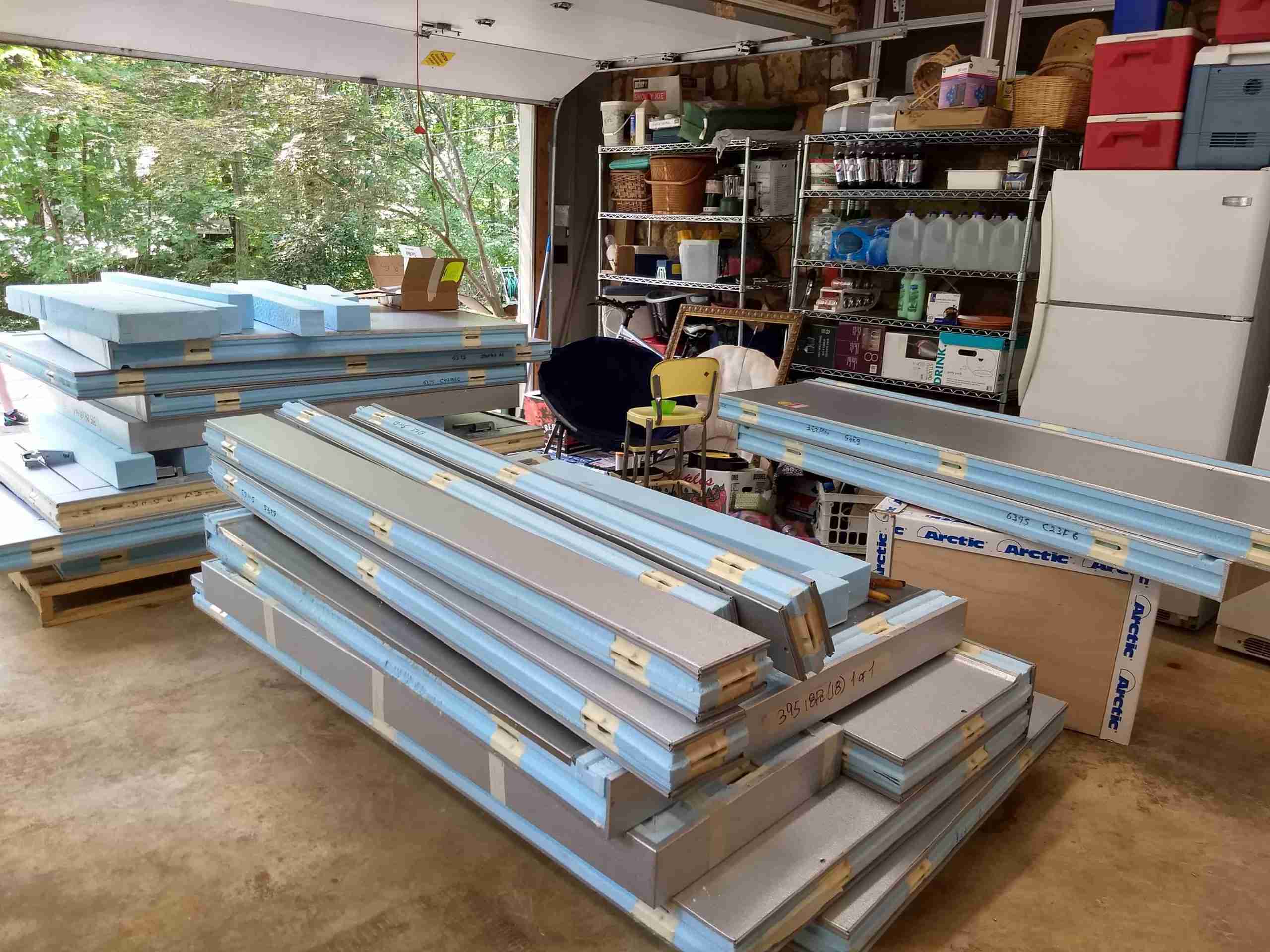 Before discovering CoolBot, Kristen had a traditional wine refrigerator at her home — in addition to a rented wine storage locker at a nearby facility, where she would store between five and six hundred bottles at a time.

Since the house where she and her husband live in Huntsville, Alabama was built in 1971, there were no large closets for them to convert. They didn’t have the option of digging a basement or cellar, because their house is atop a limestone hill. The garage, although shaded by nearby trees, still got far too hot for wine storage during the summer months.

Kristen really wanted to be able to store more wine at her house. Not only was traveling back and forth between the storage facility inconvenient for her, but due to the hot and humid climate where she lives, she was afraid that exposing the wine to the elements would hinder its quality and aging process, even if it was just left briefly in the backseat of her car. She didn’t need anything too fancy, not a showpiece wine cooler, just something affordable and reliable.

She spoke with her contractor friend, who quoted her $16K for a traditional cooler installation. That was far more than she’d consider spending. (You know how much wine you could buy with $16K?!) You can guess what happened next: Kristen found out about CoolBot. She watched all of our YouTube videos and called the contractor back to show him her discovery. He agreed it seemed like a perfect fit. 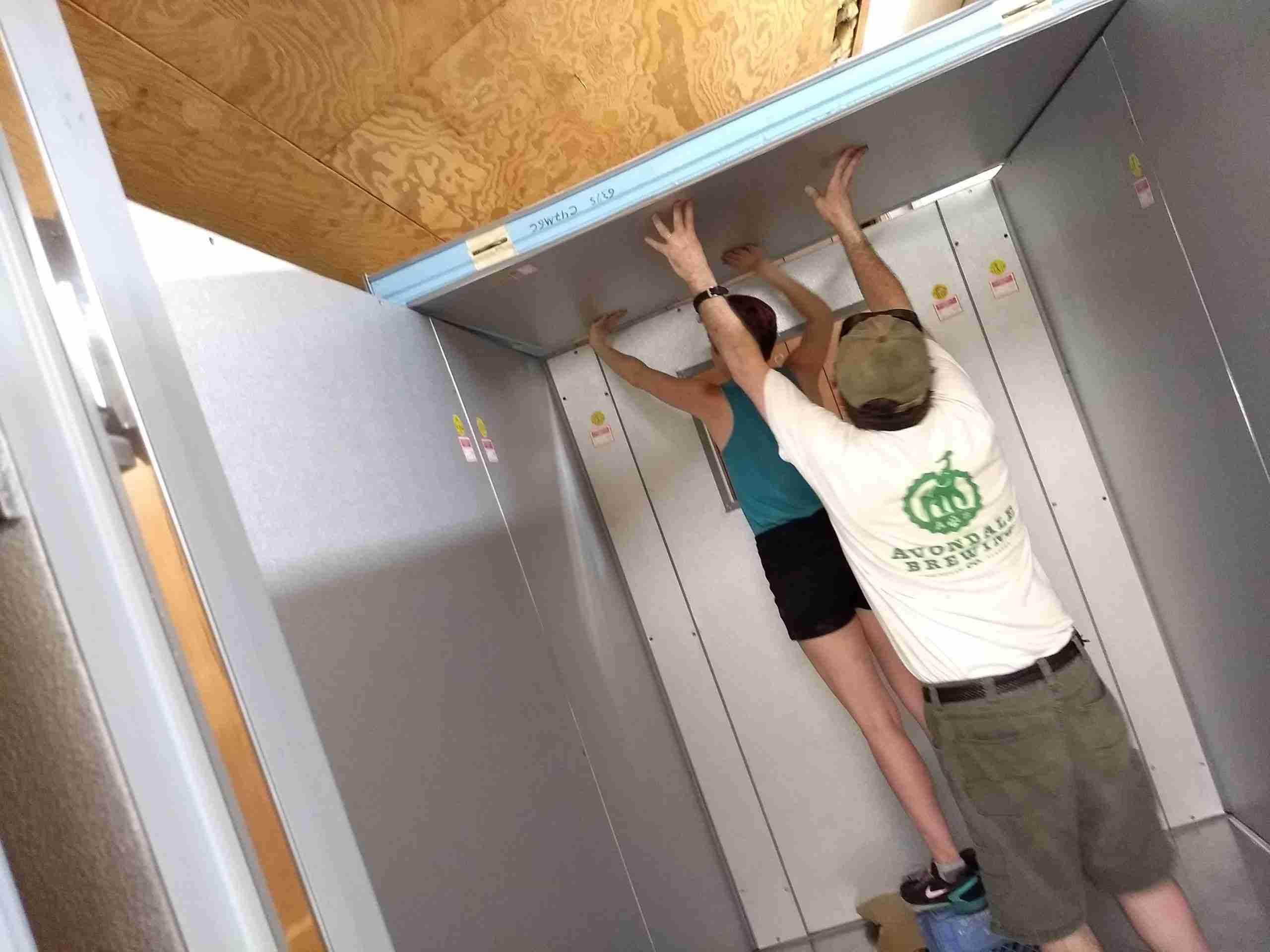 Now Kristen is able to store about 1200 bottles in her prefab CoolBot Cooler, which was only two weeks old at the time of our interview.

She’s got the cooler divided into three areas: reds, whites and bottles she’s keeping for many years. Within the whites section, she’ll further organize the shelves by varietal, then sparkling. Within the sparkling, she will then file the bottles by the producer.

She utilizes bins for further organization, where she was store 12-14 bottles per bin. “We’ve been using an Excel spreadsheet for over twenty years,” she tells. “And my daughters have been helping me.” She also makes sure to store the wine according to which bottles they’re drinking versus aging. Kristen and her husband are wine club members at a handful of wineries, so she also keeps that specific wine separate from the rest.

Wine Storage Pro Tip: Use a humidifier or dehumidifier to control the humidity levels inside your wine cooler. 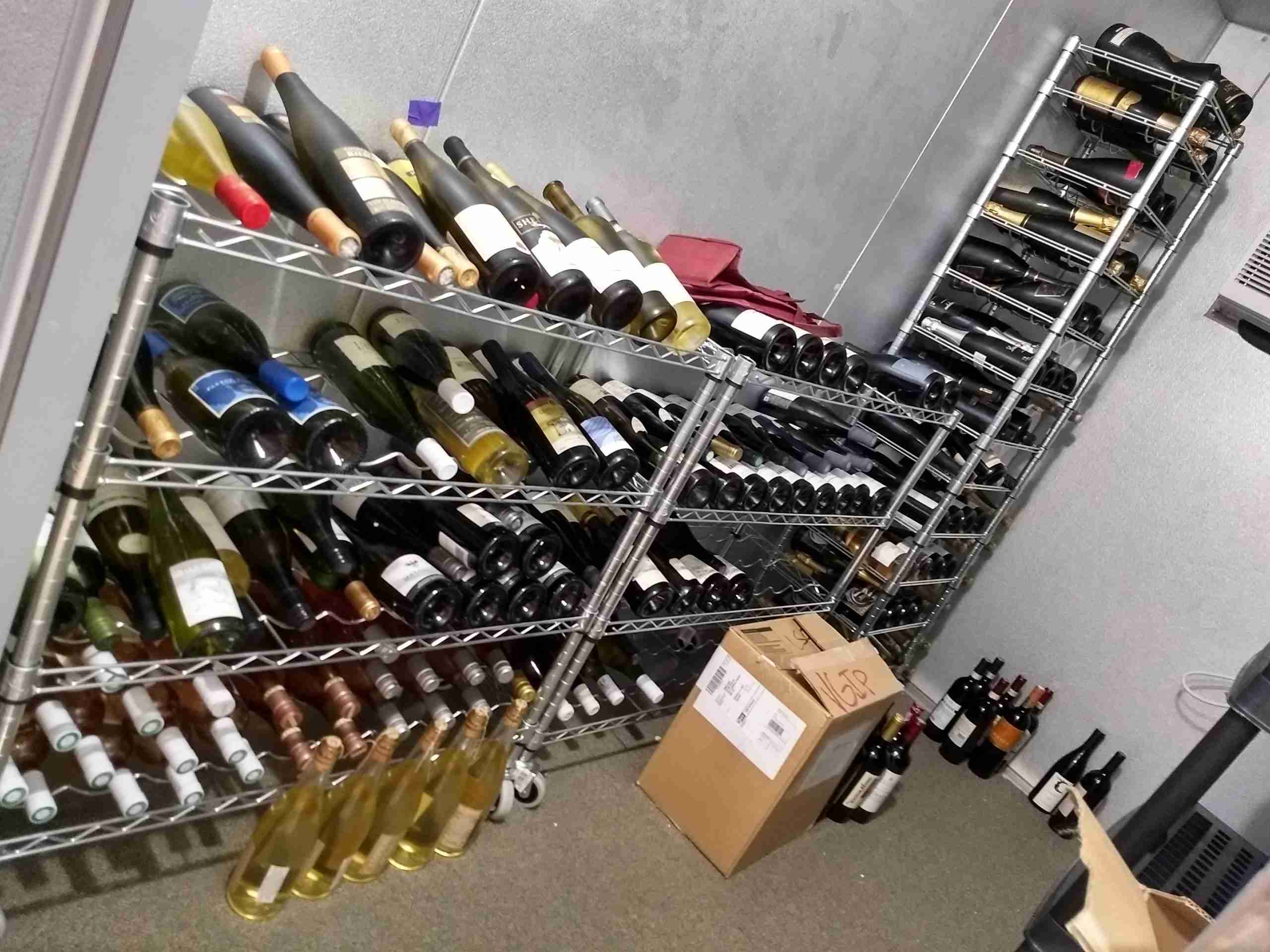 Kristen uses wine racks like this one to organize bottles in her cooler.

“I haven’t had my CoolBot that long, but so far I’m thrilled with it!” Kristen tells us. She loves the light with its switch on the outside, as her original storage locker required a flashlight to navigate. Kristen hopes to customize the exterior walls of her CoolBot with help from her son-in-law, who’s a graphic artist. “My garage has a large silver blank canvas in it currently,” she laughs.

Kristen also told us how her CoolBot delivery was quite the scene: The easiest way to get the cooler out of the truck was to break down the pallet, so they made a human chain, manually passing it down piece by piece.

Once the bits were off the truck, it didn’t take long to put together. “My husband did it in about a day,” Kristen tells us. And she’s impressed how her new cooler holds the optimal temperature for storing wine, 55 degrees Fahrenheit, even in the steamy Alabama heat.

“I like to just go out to the garage and smile at it,” she says.

While the CoolBot is super helpful in allowing Kristen and her husband to store their massive wine collection, it’s also been essential to Kristen’s business as a wine educator. “I’m frequently given wine to use with my students for presentations and tasting, and I’ll need to store the bottles until I use them. Now I don’t have to try to fit it into rented locker, drive to it, go through unlocking procedures, transport in the hot car, etc. I know it’s at just the right temperature until I use it,” she says.

CoolBot has provided Kristen with ease, convenience and a piece of mind about the safety and quality of her precious product. Now when she’s gallivanting between Louisville, Kentucky and Washington, DC for work, she doesn’t have to think twice about whether the wine in her storage unit is secretly broiling away or whether or not she’ll be able to fit that extra case for next week’s tasting in her little home cooler. She can simply sit back, relax and enjoy a crisp glass of her favorite Côtes du Rhône.