We aren’t here to debate whether your beer will spoil if you let it come to room temperature and then re-chill it (it won’t) or whether you should be serving your IPAs at 45°F to 50°F and your Doppelbocks at 55°F to 60°F (you probably should).

What we do want to talk about is how beer storage temperature will affect your beer, after all of the fermentation and other temperature-sensitive steps have been completed.

Whether you’re a brewery owner who wants to ensure the quality of the product you supply to customers or a homebrewer with a reputation of making the best beers in your social circle, storing your beer at the right temperature can help you achieve that goal.

As a brewer, you craft each of your beers to taste a particular way, whether that’s light and crisp or dark and smooth. Whatever it is, you’d like the people who drink that beer to have a taste experience as close as possible to your original intention. Keeping your beer cold will help you preserve that “brewery fresh” taste as long as possible.

One of the big problems is oxidization. Christopher Barnes explains this problem well on his popular blog I Think About Beer. He says:

“No matter how hard brewers try, there is always some oxygen remaining inside the beer container….Given time, that oxygen will ‘oxidize’ the beer creating the chemical Trans-2 Nonenal, also known as E-2 Nonenal, which is particularly prevalent in beers that have been way too warm too long. This chemical creates the classic wet paper or cardboard aromas that signal ‘this beer is old.’ Keeping the beer cool will slow this process down.”

Barnes also presents a figure showing how beer freshness degrades over time at various temperatures. The key takeaway is that beer stored at high temperatures will decline much faster than beer kept cold.

Do you know the origin of IPA? It was designed in the late 1700s to withstand the long journey by ship from Britain to India, which meant spending up to six months in hot climates. Rumor has it that this “hot maturation” process created a beer that was so good, it became popular back in Britain.

To test out whether hot maturation really made that much of a difference, Martyn Cornell of Zythophile performed an experiment meant to replicate the conditions onboard.

He took two bottles of IPA — stored one in a cool cupboard in London and send the other one to Abu Dhabi, where it sat outside in the heat for three months, occasionally being turned over to simulate the movement of a ship. He then had the Abu Dhabi bottle shipped back to London and tried both bottles at the same time.

What he found was that the two bottles were “unmistakably different.” He describes them like this:

“The stay-at-home IPA was silver trumpets, with everything higher, brighter; the well-traveled, “maderised” version was golden trombones, a baritone to its brother’s tenor.”

He liked them both. The point is simply that beer stored hot tastes much different from beer stored cold.

Here’s another fun experiment, this one from homebrewer Ray Found, which he describes in detail on the Brülosophy blog.

Found made a batch of his Bohemian pilsner. At the end of the brewing process, he transferred the beer into two kegs — storing one in a refrigerator set to 35°F and other in a closet that sat at about 68°F to 73°F. He left them there for a month before transferring them into his keezer, where they sat for another month.

Then, Found invited 20 people with “varying experience levels” to participate in a blind taste test. Each person got one sample of the beer stored warm and two samples of the beer stored cold. They were asked to select the unique beer and also say what they liked better.

In total, 12 of the 20 tasters successfully identified the beer stored warm, and five of the 12 actually preferred it (two preferred the beer stored cold; the rest did not report a preference). Found suggests that this result might be due to the fact that the tasters didn’t know what style beer they were drinking. In his opinion:

“I perceived the beer stored warm as having the characteristic sweet/cloying character I frequently associated with old or oxidized beer. While not entirely unpleasant, it lost many of the characteristics I expect in a typical Pilsner, but rather possess an impression of sweetness more reminiscent of a less phenolic Belgian Pale.”

What these experiments show is something that most brewers just instinctively know — that storage temperature can affect how a beer comes out quite significantly. That could mean turning a light IPA into a caramel one or turning a pilsner into a pale ale. In any case, storing your beer warm doesn’t necessarily mean you’ll have to toss it down the drain, but it does mean you might get something completely different from what you were aiming for.

Do you have any warm storage vs. cold storage beer stories? We’d love to hear them! Share them with us in the comments below. 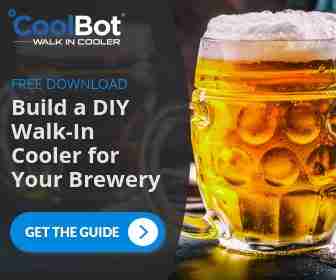