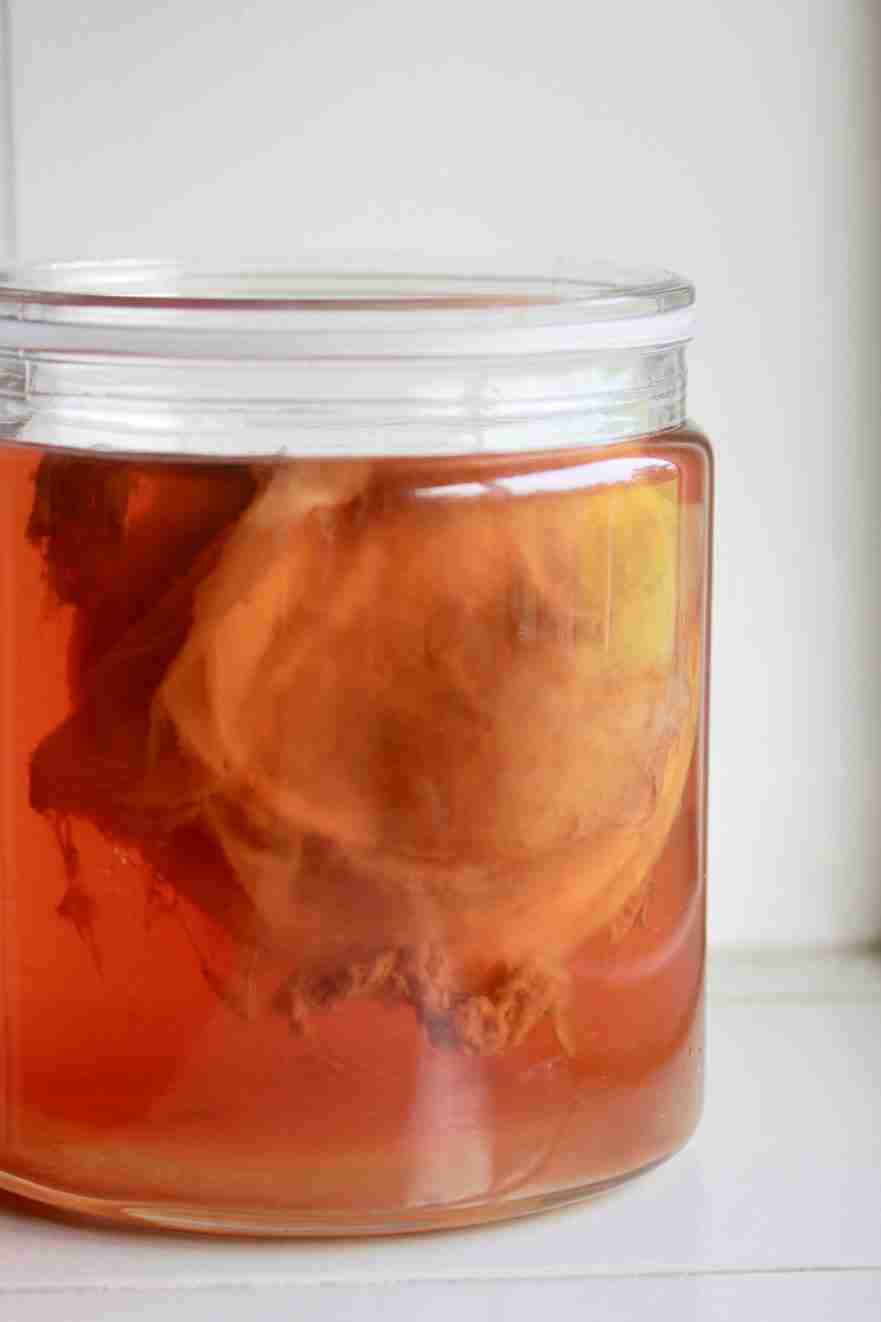 Whether you call it a health food craze, a pop-culture fad, or the millennia-old tea of life, kombucha has likely come across your radar. While it has been around for over 2000 years, you’ve probably more recently noticed it filling shelves in the grocery stores and listed on tap menus at your favorite breweries. Touted for its health benefits and fascinating flavors, kombucha has exploded in popularity. In fact, the market for kombucha has nearly surpassed $2 billion. With its rising prevalence, you may have noticed the ABV insignias on some bottles, or even been carded at checkout with nothing but a bottle of ’bucha. This has probably left you wondering. Does kombucha contain alcohol? Stick with us! Here, we’ve put together a beginner’s guide to understanding kombucha alcohol content, including where the alcohol comes from, how it’s regulated, and how to measure it.

Kombucha is a fermented tea drink. While black, green, or oolong teas (don’t use herbals, they can mess with the SCOBY’s health) provide the base for a kombucha brew, the beverage tastes world’s away from afternoon tea time with cream and biscuits. Because the process of fermentation creates acetic acid and carbon dioxide, kombucha becomes both tart and carbonated. From this base, nearly any flavor can be added. Fruit and vegetable juice, floral extracts, and all sorts of herbs give way to a wide array of kombucha styles.

How Kombucha Is Made

Kombucha is made through a process of fermentation that happens when the SCOBY consumes the sugar added to the brew.  While this is just an overview of the science, check out this article for a great instructional on how to make kombucha.

The key to kombucha lies with the SCOBY. Don’t confuse it with the mystery-solving cartoon canine – SCOBY stands for a Symbiotic Culture of Bacteria and Yeast. While a SCOBY looks like a slimy pancake and is sometimes called tea mushroom, it’s not merely a fungus. In fact, the SCOBY is a community of several different species, including bacteria and single-celled fungi called yeast! While the exact community changes depending on the SCOBY, common species are from the bacteria genera Gluconobacter and Acetobacter along with the yeast genera Zygosaccharomyces, Saccharomyces, and Schizosaccharomyces. It’s up to this microbial team to transform your tea into the sparkling sips of a kombucha brew.

To start a batch of kombucha, the first step is to dissolve sugar into brewed tea. Once the SCOBY gets a hold of the liquid, the real work begins. The yeast starts the process, figuratively chomping down the sugar. This is the same fermentation process as beer and wine, and the result is…you guessed it…alcohol.

However, after the squads of tiny fungi transform the sugar into ethanol, that’s when the second part of the fermentation happens. Where beer and wine use only yeast for fermentation, remember that the SCOBY is that community of yeast and bacteria. The bacteria have their own magic to work. Members of the acetobacter family specialize in converting ethanol into acetic acid aka vinegar. This gives kombucha its characteristic tangy flavor. The process isn’t perfect, though. Not all the ethanol transforms, leaving some tiny, albeit unpredictable, amounts of alcohol.

So is kombucha alcoholic?

Because the process of fermentation leaves kombucha slightly alcoholic, this may raise some questions for you. How much alcohol is in my kombucha? (Depends.) Is kombucha safe for children and pregnant women? (Sometimes and Never.) Can I get a buzz off a bottle? (Probably.)

In a commercial setting, kombucha is at the whim of the US Alcohol and Tobacco Tax Trade Bureau (TTB). In general, the TTB does not restrict sellers or consumers if the ABV stays below 0.5%. If it goes above that, then regulations do apply. Children can drink kombucha with ABVs below this level. However, because of both the caffeine and alcohol content, pregnant and breastfeeding women should never drink kombucha, even at regulated ABVs.

There’s a tricky aspect of the TTB’s assessment of alcohol content. They measure the alcohol at any given point in the process. That includes during production, at the time of bottling, or after bottling. That means that even though a brew of kombucha measures 1.5% alcohol, once the yeast eats the sugars, that percentage is likely to decrease after the bacteria converts all that ethanol into acetic acid.

Unfortunately, the way to standardize kombucha alcohol content is pasteurization. That means killing the SCOBY cultures that provide kombucha’s purported health benefits. Many commercial brewers have opted to provide two lines of kombucha, one that stays below TTB regulations and another that may have slightly higher ABVs, but maintain a higher amount of probiotics.

On the other hand, the nature of homebrew kombucha makes it much less predictable. While some batches may hover around the 0.5% ABV range, others may push upwards of 3.0% ABV. That’s nearing the average beer alcohol content of 4.5%!

So the question remains, how do you measure kombucha alcohol content? At commercial facilities, they have access to all a manner of high-tech equipment. Many use a method called the distillate-specific gravity method. Without getting too much into the chemistry, this process essentially removes the alcohol from the kombucha through distillation (purifying the alcohol through a heating process). Adding distilled water dilutes the removed alcohol. Since all distilled water has a constant density, the change in density of the new mixture will reveal the alcohol percentage!

For your homebrew, there are affordable hydrometers you can buy that essentially replicate the distillate-specific gravity method. You likely won’t get as precise results as the lab-tested beverages, but it can at least provide you with an estimate of the ABV.